UNESCO has released a new study “Rebalancing trade flows between Europe and the Caribbean?” to explore opportunities for developing countries to increase participation in global trade of cultural goods and services in terms of Sustainable Development Goal (SDG) 10 on reduced inequalities.

The Economic Partnership Agreement (EPA) signed between the Caribbean Forum States (CARIFORUM) and the European Union in 2008 was, in all accounts, ground-breaking. It pioneered North-South regional trade agreements designed to redress asymmetric exchanges in trade. The Protocol on Cultural Cooperation (PCC), dedicated solely to facilitate exchanges, including in the audiovisual sector, was unprecedented: cultural goods and services revered the rare recognition in trade relations and both regions anticipated mutual benefits for their creative industries. 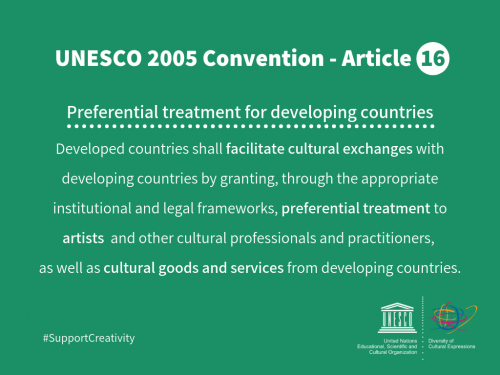 This was based on the principle of preferential treatment – a compelling provision of the  2005 Convention on the Protection and Promotion of the Diversity of Cultural Expressions, now ratified by 146 parties, that explicitly calls on developed countries to improve market access for cultural goods and services from developing countries, and facilitate the mobility of their artists and cultural professionals.

Today, the EPA stands in a political climate characterised by global security concerns, increased travel restrictions and growing scepticism towards multilateralism and international cooperation – radically different from when the agreement was celebrated just over ten years ago. Has this attitudinal shift affected the implementation of this historic agreement? UNESCO’s new publication explored this question.

The cultural protocol has led to not only the new opportunities for Caribbean creators, but also the greater recognition of the creative sector as an integral part of sustainable development. Over the past decade, various governments and domestic stakeholders created cultural policies, creative trade agencies and established artists’ registries. For instance, Barbados adopted the Cultural Industries Bill in 2013, offering a range of tax and fiscal incentives to stimulate the growth of the creative industries. In Trinidad and Tobago, the Creative Industries Company was established to guide the strategic and business development of the Music, Film and Fashion sectors. JAMPRO (Jamaica Trade & Invest) facilitates the implementation of investment and export projects, especially through its Film Commission.  The Caribbean Development Bank (CDB) also launched a Cultural and Creative Industries Innovation Fund (CIIF) in December 2018.

Our Film Commissioner, @reneetrobinson, is at @mdf_cannes ! At the top of her agenda is promoting #Jamaica as a #film business location, and representing local content for international distribution. #dobizja #filmjamaica #pavillionafriques pic.twitter.com/8MyriF8G2F

The Protocol provides creators with innovative schemes: Caribbean audio-visual productions, when compliant with the 80/20 co-production ratio set by the Protocol, can enter the EU market on equal footing as works produced in the EU. The PCC also allows cultural practitioners to enter the EU in order to collaborate on projects, to receive training, and to engage in production and other activities, as long as they are not involved in commercial activities in the EU. 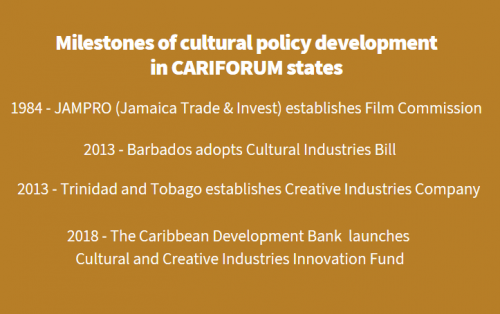 Yet, the study shows that the potential of Protocol remains largely untapped, and the expected increase in cultural exchange and diversity of cultural expressions has not materialize. The main obstacles to full utilization of the PCC are visa or co-production facilitation issues, which fall under the authority of the EU Member States.

“The experience with the EPA suggests that having a trade agreement and the associated market access in place is not sufficient to improve trade, especially in an asymmetrical trade arrangement, such as the EPA, and in a domain as sensitive as culture. This begs the question of whether a more proactive approach is required to build market opportunities and facilitate trading relationships, through a combination of actions on the demand and supply side”, argue the authors.

The new ACP-EU Programme “Towards a viable cultural industry", launched in 2019, seeks to contribute to the emergence of viable cultural and creative industries, including the audiovisual sector, and improve access to local, inter-regional, European and international markets for African, Caribbean and Pacific (ACP) cultural goods and services. 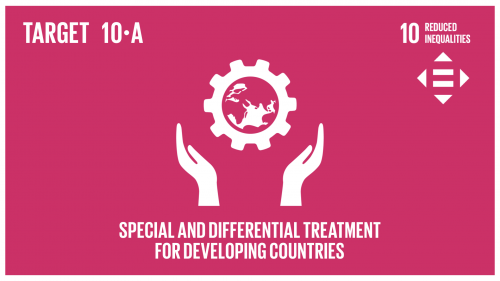 Still, major imbalances in the global market place persist. Globally, developing countries accounted for only 26.5% of the share of global exports of cultural goods in 2014. Sustainable Development Goal 10 puts forward Reduced Inequalities as a priority for all countries, with a specific target (10.A) on special and differential treatment for developing countries. As cultural and creative industries steadily become a major economic player in both revenue and employment, the gravity of imbalanced cultural trade continues to grow.

This study, published within the framework of the Aschberg Programme for Artists and Cultural Professionals, was conducted by Mira Burri (Senior lecturer and managing director for internationalisation at the Faculty of Law, University of Lucerne, Switzerland) and Keith Nurse (World Trade Organization Chair holder and Senior Fellow at the Sir Arthur Lewis Institute of Social and Economic Studies, The University of the West Indies, Barbados).

It includes messages from key government and industry actors, and puts forward policy recommendations to explore further the immense potential of the 2005 Convention in positioning culture in the global trade discourse.

Watch also - Facebook live with Andrea King, Barbados, from UNESCO's Create|2030 talk on the state of cultural and creative industries and trade in the Caribbean: