Article 39.4 of the 1992 Constitution of the Republic of Ghana declares, “the State shall endeavour to preserve and protect places of historical interest and artifacts.” The 2004 Cultural Policy goes further to proclaim, “through State and private initiative, Ghana shall develop its heritage and cultural assets and promote their use and appreciation.” Within this context, Ghana’s result of 0.53/1 is an intermediate result regarding the establishment of a multidimensional framework for the protection, safeguarding and promotion of heritage sustainability. The degree of commitment and action taken by Ghanaian authorities is mixed and varies according to the component of the framework. While many public efforts have been dedicated to raising-awareness and creating a national registry for tangible heritage, persisting gaps call for additional actions to improve the framework regarding the updating of registries, the inventorying of elements of intangible heritage, mechanisms for community involvement, and stimulating support amongst the private sector.

Ghana scored 0.59/1 for the protection, safeguarding and management of heritage, indicating that there are several policies and measures in place to prevent illicit-trafficking, regulate archeological excavations and prepare for disaster management, but that no recent concrete policies or measures have been adopted for protecting tangible or intangible heritage, or to involve communities in the processes of identification, registration or inventorying.  Though actions taken to prevent illicit-trafficking, such as the delivery of certificates for export, are to be applauded as Ghana has yet to ratify the 1970 UNESCO Convention or the 1995 UNIDROIT Convention, there continues to be no specialized police unit to enforce the prevention of illicit-trafficking of cultural objects or efforts to involve communities in these actions. Other gaps include the publication of regularly updated management plans for major heritage sites and the inclusion of heritage in national development plans.

Ghana scored 0.73/1 for the transmission and mobilization of support, which reflects the recent efforts taken to raise awareness of heritage’s value and its threats amongst the population. In addition to signage at heritage sites and differential pricing, awareness-raising measures have included workshops for teachers and school programmes, as well as media campaigns led by the Ghana Museums and Monuments Board. While much has been done to educate the public, little has been done to gain the support of the civil society and private sector. Additional efforts to involve the civil society in heritage protection, conservation, and transmission, as well as explicit agreements with tour operators are two means to be further explored. 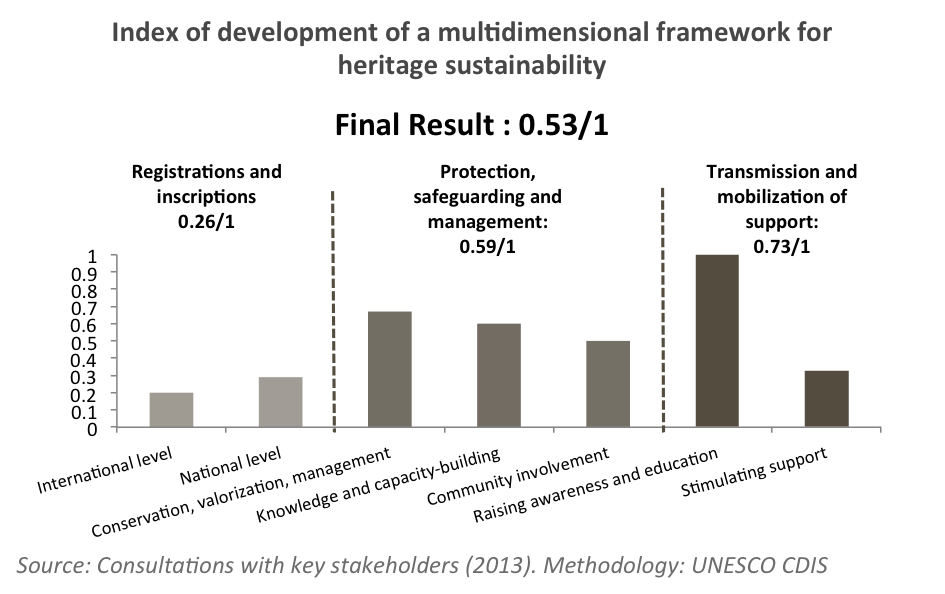