Dimension:
Gender Equality
Genre
Igualdad de Género
English
Indicator:
Gender equality objectives outputs
Description:
17 GENDER EQUALITY OBJECTIVE OUTPUTS: 0.62/1 (2013)
The Constitution of the Kingdom of Cambodia states that “all forms of discrimination against women shall be abolished. The exploitation of women in employment shall be prohibited. Men and women are equal in all fields especially with respect to marriage and family matters…” (Article 45). In addition, the Constitution guarantees the respect for citizens’ fundamental rights contained in the Universal Declaration of Human Rights and other international human rights instruments.
The result of 0.62/1 reflects a medium degree of objective gender equality and the efforts made by the Cambodian government in order to elaborate and implement laws, policies and measures intended to support the ability of women and men to enjoy equal opportunities and rights. Such a result is consistent with the average result for test phase countries of the CDIS, which is situated at 0.64/1.
A detailed analysis of the four areas covered by the indicator, reveals significant gaps where additional investments are needed to improve gender equality basic outputs. Little divergence is recorded for the average number of years of education for men and women aged 25 years and above, or for labour force participation rates of men and women. Yet, progress can still be made regarding political participation and gender equity legislation. Women represent only 20.3% of parliamentarians since the 2008 elections. Nevertheless, this percentage still indicates that the situation has improved greatly since the 1993 elections when only 5.8% of elected representatives were women. Still, 20.3% remains a low result compared to the target of 30% set by the Cambodia Millennium Development Goals (CMDGs) for the year 2015. Currently, no quota system exists to favour women’s political participation. Regarding other gender equity legislation, several legal instruments are already in place to protect against domestic violence and sexual harassment: the reformed Criminal Code; the 2005 Law on the Prevention of Domestic Violence and Protection of Victims, the National Action Plan to Combat Violence Against Women, the 2008 Law on the Suppression of Human Trafficking and Sexual Exploitation and the amended Marriage and Family Law. However, though these laws and measures show that Cambodia is moving in the right direction to create a legislative framework, the implementation of laws on domestic violence is obstructed by inconsistent enforcement and cultural norms that continue to hamper women’s rights. Policies require people, and a further look into the additional subjective indicators below reveals the persistence of negative cultural values, attitudes and practices in Cambodia, which reinforce the subordinate role of women and hamper their full and equal participation in all spheres of life.
Image: 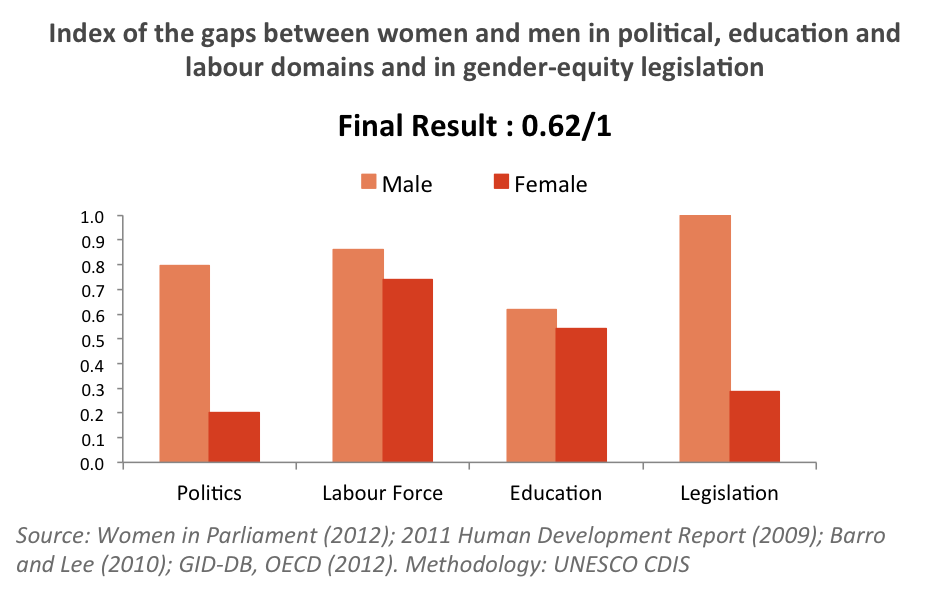