A city located at the southern edge of the Korean peninsula and with 140,000 inhabitants, Tongyeong is internationally renowned as the hometown of many celebrated composers, including Isang Yun, who became a genuine symbol of the city and the most famous music figure and icon of Korean music. In Tongyeong, music links tradition and modernity with many of its contemporary musicians drawing inspiration from the traditional operas such asthe mask dance Ohgwangdae. As music is the city’s lifeblood, it has recently invested US$ 52 million in a state-of-art concert hall.

Tongyeong is a city that knows to celebrate music within lively festivals including the Pop Music Festival and the Tongyeong International Music Festival (TIMF). The TIMF is a ten-day event that pays a large tribute to Isang Yun, and is considered as one of the most influential and well respected contemporary music festivals in Asia. Operating on an annual budget of US$ 2 million, the festival hosts a wide and diverse array of international artists and orchestras, and attracts an audience of over 20,000 every year.

While firmly supporting the emergence of creative industries, Tongyeong harnesses the full potential of culture and creativity as drivers of social inclusion and cohesion. In support of this framework, in 2014 it launched the Culture Day programme, which, on the last Wednesday of every month, enlivens public areas throughout the city with a special cultural programme. Film screenings, music concerts and performances are offered free of charge so everyone can take part. This outdoor event aims to increase participation in cultural life, as well as improve the quality of urban life through culture and creativity.

As a Creative City of Music, Tongyeong envisages: 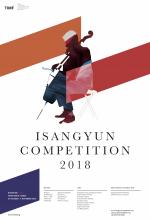 Call for Applications | The 2018 Edition of Tongyeong Creative City of Music ISANGYUN Competition is open
About: Tongyeong International Music Foundation (TIMF) is holding the...
When:
Monday, August 6, 2018
Know more