About the Creative City:
Culture has always been at the heart of Santa Fe and has been an integral part of the city’s history and cityscape. The exchange of goods and ideas is deeply rooted in Santa Fe, starting with the trade fairs attended by Native Americans and Mexico's indigenous population, to El Camino Real and the Santa Fe Trail, to the vibrant markets and art fairs of today. Santa Fe's appointment to the UNESCO Creative Cities Network is a testament to the city's important achievements in cultural industry development.
Santa Fe has a wealth of cultural resources that have helped build the city into what it is today. Native American traditions, including weaving, pottery, jewelry and dance remain an important part of contemporary Native culture and are present throughout the city.  Spanish colonial art forms also continue to thrive today including folkloric dances, straw applique and tinwork. Santa Fe, where one in 10 jobs are tied to arts and cultural industries, is also home to more than 250 galleries, a vibrant performing arts community and an impressive range of museums.
Three major annual art markets are organized: the Santa Fe International Folk Art Market; the Traditional Spanish Colonial Market and the Indian Market. Santa Fe is also proud to have the highest percentage of writers and authors in the labor force in the US.
One percent of Santa Fe’s hotel tax supports local arts organizations, helping to maintain a flourishing arts community, employ artists and attract tourism. Furthermore, two percent of the cost of city buildings and infrastructure support site-specific public artworks. The Railyard, for example, is home to galleries, restaurants and the Santa Fe Farmers’ Market, one of the most widely recognized farmers’ markets in the United States. The Santa Fe University of Art and Design also contributes to the city’s vibrant creative economy by bringing creative young people to the city.
Added Value:
As a Creative City of Crafts and Folk Arts, Santa Fe envisages:
Member since:
2005
Contact:
Debra Garcia, Director, Arts Commission, unesco@ci.santa-fe.nm.us
Membership Monitoring Reports: 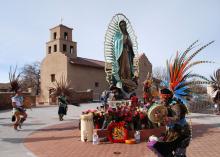