Located by the Caspian Sea in the Islamic Republic of Iran, Rasht comprises a population of around 640,000 inhabitants. Surrounded by the fertile delta of the Sefīd-Rūd River, both the city and its gastronomy sector benefit from a rich variety of natural resources and rely on the exploitation of local resources, especially various species of fish and in-season products. Above all, gastronomy in Rasht is synonymous with the protection and promotion of cultural heritage. Throughout generations, Rashti cuisine has not only carried on ancient recipes, but also unique cooking utensils and methods.

Since 2014, the Sabzeh Festival has taken place in the Rural Heritage Museum and focuses on promoting traditional cultural expressions of crafts, folk art and gastronomy, including the typical cooking method in Gamaj clay pots. While gastronomy fosters sense of community and intercultural and intergenerational dialogue, it is also a key driver for sustainable urban-rural interconnection and economic prosperity, so much so that the city grants long-term loans in support of farmers. In addition, Rasht offers a wide range of workshops and vocational trainings in the fields of gastronomy and agro-food, emphasizing on sustainable ways of production and consumption of healthy food.

In recent years, the Municipality has stepped up its efforts to reduce inequalities and unemployment by investing in culture and creativity to move along a sustainable urban development path. In cooperation with the regional Department of Education of Guilan, Rasht has supported many female-headed families and people from indigenous communities by building their capacities through free-of-charge trainings in various creative fields, allowing many of them to build their own small and medium-sized enterprises.

As a Creative City of Gastronomy, Rasht envisages: 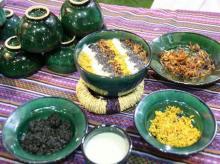 “From Farm to table”, the Festival of Organic Food of Rasht
About: The UNESCO Creative City of Rasht, Iran, launched in December...
When:
Saturday, December 7, 2019 to Thursday, December 12, 2019
Know more