Dublin is a City of Literature where creativity, and especially writing and words in all forms – prose, poetry, playwriting and song writing – are valued and celebrated. The city was home to four Nobel Prize Laureates for Literature. Its literary influence has spread to the four corners of the world: Bloomsday, commemorating the life of James Joyce, is celebrated as far away as Melbourne and St. Petersburg, Oscar Wilde Societies exist around the world and one of the world’s most familiar literary characters, Dracula, was created by Irish author Bram Stoker.

Literature and literary culture are nurtured in the city, which hosts the International Impac Dublin Literary Award, the world’s most well-endowed prize for a single novel. It is also home to the Dublin Theatre Festival, the oldest of its kind in the world. Writers are appreciated in this city, which has named three bridges and numerous streets after writers. The Dublin airport is adorned with writers’ images and quotes that accompany people on their travels, and the city is also home to a ferry company that names its ships after writers.

Dublin recognizes its great literary tradition but, more importantly, takes pride in its vibrant contemporary scene. Along with the literary greats of the past such as James Joyce, Samuel Beckett, George Bernard Shaw, Bram Stoker and Oscar Wilde, Dublin writers today are leaving their mark on the international scene. Colum McCann, Anne Enright, Colm Tóibín are all winners of prestigious international writing awards. Eavan Boland, Brendan Kennelly, John Connolly, Cecelia Ahern and Derek Landy, among others, are widely read and translated and enjoy enormous international popularity. The role of creativity and innovation is recognized, valued and embedded in city programmes and policies, and provides industry with a competitive advantage and enriches the social, economic and cultural lives of citizens.

As a Creative City of Literature, Dublin envisages: 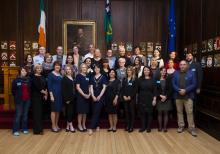