Located in central Turkey, Kırşehir is a municipality with a population of around 242,000 inhabitants. Of that, 2,000 are musicians in the city’s celebrated music industry. Referred to as Abdals, traditional performers of local music are considered one the city’s most important communities. Their special and distinctive lifestyles, social events and religious views, values and ideas in the spiritual realms are the main sources of their authentic art. As well as, playing traditional musical instruments, over the last 300 years, the city has also adapted western techniques, in turn, creating unique and enriched musical sounds.

Within Kırşehir, music is a vital part of every life and often plays a significant role in many religious and cultural events. The city is united by music and it is used to bring people of all ages together. The World Art Day Exhibition is a holistic event that promotes a variety of art forms, including music. As well as celebrating tradition artists, musicians and instruments, the fair also aims to enrich the city’s music culture by showcasing a collection of foreign instruments and musical tastes. Furthermore, Kırşehir hosts a number of events for marginalized or disadvantaged social groups, ensuring that all citizens have the opportunity to be involved within the music sector.

To further support the Kırşehir music industry, the Ministry of Culture and Tourism launched a music heritage programme in which 15 Abdals were united, with the aim of performing as a group in national and international events. By participating in global competitions, this programme provided significant opportunities for musicians to exchange ideas about music and develop a greater understanding of different musical instruments. At a local level, the city’s strategic plan for 2015-2019 implemented by the Culture and Tourism directorate focused on protecting historical and cultural heritage, including music, and promoting social development through cultural experiences. Future plans aim to take this mission a step further and integrate musical heritage into contemporary social and economic life by implementing several music-centric initiatives and creating greater opportunity for musical performance within the city.

As a Creative City of Music, Kırşehir envisages: 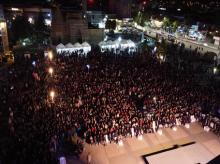 Kırşehir Organized the International Neset Ertas Memorial Festival
About: From 23 to 25 September, Kırşehir, a Creative City of Music,...
When:
Friday, September 23, 2022 to Sunday, September 25, 2022
Know more 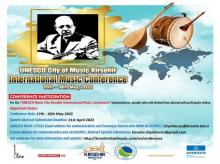