Kütahya is located in western Turkey and has a population of 573,642. It is well known that Kütahya’s history is not only written with letters but also with tiles. The tiles refer to Kütahya being the centre of çini making – a ceramic ware using glass powder, quartz and clay. Çini is everywhere in the city’s landscape, covering public fountains, civic buildings and railroad stations. A centuries-old celebrated artistic tradition, çini has both a cultural and social function within the city. As of 2016, there are nearly 435 crafts workshops employing 15,000 craftsmen, of which 95% are related to çini production.

Kütahya hosts several national and international events to promote çini. This includes the International Çini Contest which recorded a participation of 33 different countries during its last edition and focuses on the promotion and development of çini. The Advanced Technology Center and Çini and the Ceramic Research and Implementation Centre are two institutions which predominantly concentrate on the research and development aspect of the çini’s raw materials. They also focus on further enhancing the technological components of its production in order to sustain resource efficiency and quality criteria.

The Municipality is undertaking a three-pronged development approach for cultural activities. Firstly, in order to promote greater access to cultural spaces, as well as capacity building, Kütahya’s Municipality allocates restored historical houses to craftspeople. Secondly, the Directorate of Culture and Tourism has started designating Kütahya’s artisans as candidates for Living Human Treasure recognition with a view to enhance their status within the creative sector. Thirdly, aimed at raising visibility and awareness, new spaces are being created to allow a major dissemination of cultural products, while important city areas are being decorated by local craftspeople.

As a Creative City of Crafts and Folk Art, Kütahya envisages: 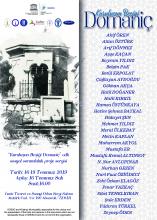 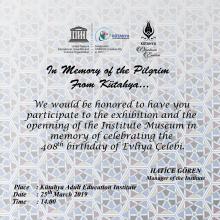 Kütahya to Open a Museum in Memory of Evliya Çelebi
About: On 25 March 2019, Kütahya Adult Education Institute will launch...
When:
Monday, March 25, 2019
Know more