Second city of the State of Victoria in Australia, with more than 240,000 inhabitants, Geelong has an important indigenous design heritage dating back 30,000 years and a modern industrial history of making textiles, chemicals and automotive and machinery components. Dusting off its industrial past, Geelong works towards becoming a global showcase for reinvention and clever design. The region is rapidly evolving with cutting-edge smart technology, industrial and urban design, advanced materials and a flourishing creative industries sector, accounting for 5.5% of the overall economic output for the region and 5,200 businesses.

Geelong is enhanced with major cultural spaces and has a great number of facilities for events, entrepreneurial hubs, film production, online connectivif2ty and intelligent systems. The International Design Technology Conference (DesTech) is a flagship multidisciplinary space which draws upon an international network of designers and researchers to exchange and explore design's intersections. The event contributes significantly to the promotion of new technologies as well as cross-cutting design and creative thinking.

Geelong has adopted clever design concept to reimagining urban places and aims to deliver a thriving city which is prosperous, liveable and socially inclusive. Adopted in 2013, the 10-year Public Art Strategy positions Geelong as the centre of innovation, leveraging the Municipality's strategies to enrich quality of life for residents, and strengthening the design aesthetic appeal of the city. Additionally, the citizen-led 30- year plan 'Our Future'greatly contributes in shaping Geelong as a clever and creative city, focussed on innovation, digital technologies, education, and importantly, artists, designers and creators.

As a Creative City of Design, Geelong envisages: 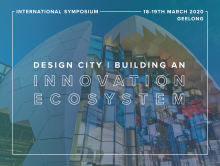