Over the course of eight days, Chefs from Tsuruoka, Japan (Gastronomy) were welcomed by their peers in Bilbao, Spain (Design) for a culinary collaboration putting both Creative Cities’ food cultures into dialogue.

The Tsuruoka group included three chefs from a Japanese restaurant, a French restaurant and a Ryokan (Japanese inn) publically-selected to travel to Bilbao to share their expertise with local chefs and culinary schools. Three Michelin-starred chefs from Bilbao led training for the Tsuruoka group, while the visiting group hosted a dinner reception featuring ingredients from both cities. The visit was rounded-out with the Tsuruoka chefs visiting a local culinary school to teach a selection of their techniques.

Continuing to strengthen ties between the two Creative Cities, a similar visit of chefs from Bilbao is planned to take place in Tsuruoka in April. 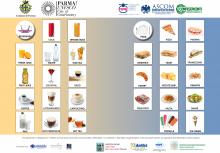 Parma Raises Awareness on Austim Spectrum Disorders
About: On 2 April, on the occasion of World Autism Awareness Day,...
When:
02 Apr 2017
Know more