The STARTS Prize 2018 of Linz, Austria is launched

The STARTS Prize 2018 of Linz, Austria is launched

STARTS (Innovation at the nexus of Science, Technology, and the Arts) is an initiative launched by The European Commission for Innovation in Technology, Industry and Arts, Ars Electronica, BOZAR and Waag Society to select the pioneering ideas and works in the field of creativity and innovation at the crossings of science and technology with arts.

This open call event aims to showcase and reward visions and achievements with an extraordinarily high potential for creative innovation, which plays a key role for the social, ecological and economic challenges that Europe will be facing in the near future.

The artistic practice of creative exploration and experimental appropriation of new technologies has a wide reaching potential to contribute to the development of new products and new economic, social and business models. Accordingly, the STARTS Prize focuses on artistic works that influence or change the way we look at technology, and on innovative forms of collaboration between the ICT sector and the world of art and culture.

The two prizes consist in the STARTS Trophy, a €20,000 prize money each. One Grand Prize will be attributed to a project on artistic exploration, namely with the potential to influence or change the way technology is deployed, developed or perceived. The other one will be allocated to the project presenting  methods for innovative collaboration between industry/technology and culture.

The 2 Grand Prize Winners will also receive 10 Honorary Mentions and 18 Nominations will be selected, published and shared among the international public as best-practice examples. Their works will exhibited at the Ars Electronica Festival in Linz, Austria, at the BOZAR Electronic Arts Festival in Brussels, Belgium as well as at the Waag Society in Amsterdam, the Netherlands.

Furthemore, other projects of the STARTS Prize will be selected and showcased at Ars Electronica, BOZAR, at the Waag Society and worldwide.

Submission phase has been extended and will end on March 12, 2018 ! 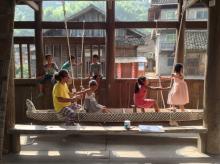 Košice invites media artists for the third edition of its Residency programme
About: As a UNESCO Creative City of Media Arts since 2017, Koš...
When:
01 Sep 2021 to 29 Nov 2021
Know more