Gola Gola! Food & People Festival was created to promote food culture, linking people, businesses, and know-hows. The Festival, organized in different thematic areas, illustrates the role of Parma as the Italian Food Valley Capital and contributes to its role as a hub of initiatives throughout the territory. Parma works at improving and facilitating the emergence of opportunities for artists and entrepreneurs to combine different forms of art and culture.

In 2017 edition, whose key word was “comparison”, 7 other Cities of Gastronomy joined the event: Bergen, Bélem, Chengdu, Dénia, Gaziantep, Östersund, and Tucson. The event provided an excellent occasion to develop intercultural cooperation between chefs by launching a chef platform, and also  to promote the food culture and identity of each participating Creative City of Gastronomy. Chefs of the 8 cities worked together to prepare a “UNESCO Dinner” highlighting different food cultures. They were also involved in Cooking Shows “UNESCO Creative Comparisons” where chefs of two different cities had to present one common “fusion” recipe. 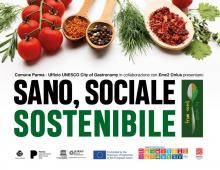 Local gastronomy on the menu of Tsuruoka Japanese Sake Festival
About: Taking place every beginning of July, the Tsuruoka ...
When:
02 Jul 2016
Know more