In April, four musicians from Bologna will be in Hannover to perform at the Klangbrücken Festival, an acclaimed event dedicated to the discovery of  contemporary music. Organized by the Nordstandt-Konzert and the prestigious Chamber Orchestra of Hannover, the event is also supported by the municipalities of the two cities.

The Creative Cities of Music of Hannover and Bologna are well-known for their international cooperation in the field of music thank to their numerous events and festivals. After the A-capella, festival, the musicians will meet again in October in Hannover and Bologna.

The Chamber Orchestra will have the opportunity to perform in October in another festival held in the beautiful  Auditorio San Filippo Neri of Bologna. The Orchestra will be under the direction of Hans-Christian Euler and will involve the soloist Juri Schamahl (oboe). In both occasions, the artists will play works of the prominent composer Lucian Berio but not only. The two festivals will represent an important opportunity to exchange and develop further cooperation in the field of music. 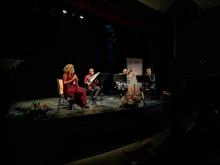 Vranje celebrates “May the month of music”
About: Recognizing the importance of music in connecting people and...
When:
10 May 2021 to 31 May 2021
Know more

Adelaide Will Host the Asia-Pacific Creative Cities Conference
About: In recognition of the significant impact of the creative...
When:
23 Oct 2019
Know more