Montreal and Östersund: on the theme of nordicity and the transversal approaches of creativity

Montreal and Östersund: on the theme of nordicity and the transversal approaches of creativity

Held by the Kopula Collective on 12 March in Montreal, the first edition of Nordicité 2016 – Design and Sustainability in a Northern context symposium – sought to explore intersections of life in the North, design and environmental and social sustainability.

During the symposium, topics such as food, habitation, transport, multiculturalism, adaptations and well-being were approached from different disciplines; meanwhile transversal questions such as “how can design be used to improve the daily lives of northern inhabitants?”, “how can we get inspiration from other nations and learn from their different ways of living?” and “how can design allow us to adapt to environmental and social change?” were raised and discussed.

On this occasion, Fia Gulliksson – creative entrepreneur from Östersund (Sweden), UNESCO Creative City of Gastronomy – visited Montreal and participated in the symposium. Fia Gulliksson is passionate about gastronomy and all forms of creativity in the service of social and community development. Her presentation as part of the “Daily Nordicity” panel and “Four Seasons Growing and Eating” workshop dealt with the manner in which culture, particularly design and gastronomy, can serve as a creative impetus for richness in Nordic communities such as Montreal, in addition to acting as agents of cohesion in society.

For the city of Montreal, gaining access to international expertise is a true privilege and it is one of the tangible advantages of belonging to the UNESCO Creative Cities Network of 116 Creative Cities. 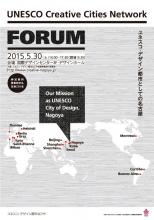