Kütahya to Open a Museum in Memory of Evliya Çelebi

Kütahya to Open a Museum in Memory of Evliya Çelebi

On 25 March 2019, Kütahya Adult Education Institute will launch a museum and an exhibition in celebration of the 408th birthday of Evliya Çelebi.

Evliya Çelebi, Turkish traveler, writer, calligrapher, poet and musician, is one of the major figures of 17th century travel literature. He traveled through Asia, Africa and Europe for forty years and recorded the story of his innumerable journeys in a ten thousand-page book entitled “Seyahatname” (Travel Book), the first and most important of Turkish travel books. Its life and work was highlighted at an exhibition under the auspices of UNESCO in 2011. Evliya Çelebi, a largely unknown figure by many, has further been acknowledged by the Council of Europe. In many exhibitions, he was considered as one of the twenty major historical figures who played a significant role in bridging different cultures and civilizations.

This new museum benefitted from a synergy and experience sharing among the local community and will further raise awareness about history and creativity at the city level.

The AQS QuiltWeek in Paducah fosters international cooperation
About: Based in Paducah, Creative City of Crafts and Folk Art since...
When:
20 Apr 2016 to 23 Apr 2016
Know more 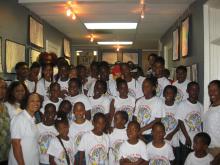 Summer Art Students Exhibition in Nassau
About: Design works created by 50 students aged between 9 and 14 years...
When:
01 Sep 2015
Know more