Kansas City (United States of America), a UNESCO Creative City of Music, recently launched a collaborative project “Voyage of the Drum”. Bringing together Creative Cities especially in the field of Music, the project highlights how music has boosted and sustained cultural identities across history and geography.

In line with the International Decade for People of African Descent (2015-2024), proclaimed  by the UN General Assembly via Resolution 68/237 in 2014, the project promotes racial equity and cultural awareness of the African Diaspora worldwide by highlighting the African influence on the musical genres of the world.

Designed as an online cultural exchange between Creative Cities especially in the field of music, the initiative will showcase Creative Cities’ various cultural traditions of drumming as well as their connection to and influence on music, creativity and culture of cities worldwide. A special focus will be given to the musical idioms rooted in the African diaspora, indigenous drumming traditions, as well as the drumming traditions of migrants and ethnic groups.

While promoting racial equity and cultural awareness of the African Diaspora worldwide, the event is also an act of solidarity for artists and cultural practitioners, calling for a more inclusive and creative COVID-19 recovery.

For more information on how to participate in the project kindly visit:

“Britten’s War Requiem” | Hannover and Liverpool Celebrate Peace Building through Music Together
About: From 2 to 11 November, the two UNESCO Creative Cities of Music...
When:
02 Nov 2018 to 11 Nov 2018
Know more 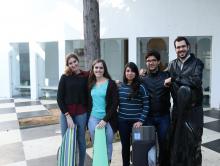