The Creative City of Bologna (Italy) has established its first International Sustainability & Food Award. Conceived and promoted by the Agribusiness Centre of Bologna (CAAB), in collaboration with the Municipality of Bologna and the Emilia-Romagna Region, the first award ceremony took place in Milan on the occasion of EXPO 2015. The Award, which will be held every two years, aims to identify and promote scientific research and initiatives in the agricultural food (agri-food) field in the name of a long-lasting and sustainable development. The winner gains 20.000 euros to be invested in research and sustainable, long-lasting and fair-trade sector's initiatives.

This award thus pursuits a clear long-term strategy: to support scientific and technological research in the field of agri-food sustainability, to improve and optimize the distribution of food, to reduce the environmental and social impacts of food production and distribution as well as to promote a new and widespread culture in the name of nutrition and education.
Bologna, designated as a UNESCO Creative City of Music, has developed this cross sector initiative involving other UNESCO Creative Cities of the Gastronomy field such as the city of Chengdu (China), in order to foster cooperation within the Network.

By organizing this international prize, the city of Bologna implements at the international level the objectives of the Network particularly in terms of enhancing international cooperation between member cities for sustainable urban development strategies and developing opportunities for creators and professionals in the gastronomy sector. 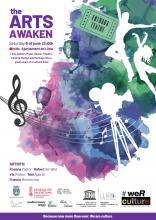 The Arts Awaken, online live festival in Llíria
About: Llíria, a UNESCO Creative City of Music in Spain will organize...
When:
06 Jun 2020
Know more

World is your stage! 9th Hamamatsu International Piano Competition
About: Held every three years in Hamamatsu (Japan), Creative City of...
When:
21 Nov 2015 to 08 Dec 2015
Know more