Fabriano, Host City of the XIII UCCN Annual Meeting in 2019

Fabriano, Host City of the XIII UCCN Annual Meeting in 2019

The Italian Creative City of Crafts and Folk, Fabriano, has been selected to host the Annual Meeting of the UNESCO Creative Cities Network in 2019.

Following the call launched to the UCCN member cities, Fabriano was the only city to present a bid, according to the process set by the UCCN Selection Criteria, to host the Annual Meeting in two years. The city had the opportunity to make a presentation at the previous Annual Meeting held from 30 June to 2 July in Enghien-les-Bains, France, where its selection as Host City in 2019 has been officially announced.

Designated in 2013 for its longstanding know-how in Crafts and Folk Art, notably its renowned hand-made paper, Fabriano will share with all member cities how the city is putting culture and creativity at the core of its economic and social development.

The foreseen theme of the meeting is “Culture - Creativity - Innovation - Inclusion: The Ideal City” echoing to the well-known painting “La città Ideale” (The Ideal City), currently kept in the Palazzo Ducale of the city of Urbino, and which conveys the values that in a well-ordered society, architecture stands as a metaphor for good city planning and government.

The UNESCO Secretariat wishes to send once again its warmest congratulations to Fabriano. 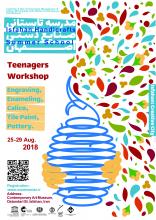 Isfahan to Launch its first Handicrafts Summer School
About: The Creative City of Isfahan bears witness to more than 190...
When:
25 Aug 2018 to 29 Aug 2018
Know more

Paducah River’s Edge International Film Festival puts Creative Cities on Screens
About: From 1st to 4 November, in celebration of the fifth anniversary...
When:
01 Nov 2018 to 04 Nov 2018
Know more