Saint-Etienne, a UNESCO Creative City of Design, chose Detroit, its counterpart designated in 2015, as the guest of honor of the 10th International Design Biennial of Saint-Etienne, held from 9 March to 9 April 2017.

Three exhibitions have been organized by Detroit Creative Corridor Centre, Public Design Trust, Akoaki and Creative Many Michigan: “Footwork”, “Out of Site” and “ShiftSpace”. Panel discussions, music performances, discussions with designers and local actors, workshops and conversations in the Detroit-style coffee shop were all warmly welcomed by local actors and Biennial audience.

Related Links:
Website of the International Design Biennial of Saint-Etienne

LAB.2030 | TAPISKWAN: Breathing New Life Into Atikamekw Heritage
About: In collaboration with the University of Montreal, the Tapiskwan...
When:
12 Jun 2018
Know more 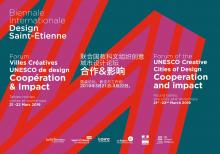 A look back at the International Design Biennial Saint-Étienne 2019 featuring China as guest of honour
About: Organized by Saint-Étienne, a UNESCO Creative City of Design in...
When:
21 Mar 2019 to 22 Apr 2019
Know more 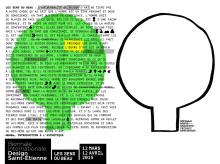