The 9th Biennale International Design of Saint-Etienne 2015 will be held from March 12 to April 15 2015. The theme of the exposition is “Les Sens du beau” (The meanings of beauty). The exposition offers sensitive experiences through objects, services, facilities and environments.  For this edition, Seoul: UNESCO Creative City of Design is invited as a honored guest city organizing an exhibition named Vitality 2014: “Beyond Craft & Design”, commissioner: Kyung Ran Choi, director of the OCDC, Seoul; the Vitality conference 2014 with the designers of the exhibition on March 12; an exhibition by Korean artist Lee Bull and Korean designers from the Museum of Modern Art, and a selection of Korean products in the Biennale shop, in cooperation with the Seoul Design Foundation. The representatives of the UNESCO Creative Design Cities are invited from March 11 to 14 for the official inauguration attended by the French Minister of Culture, a meeting with the Creative Cities of Design (including cities designated in 2014) which will be held on March 13 and the opening of the exhibition of the winners of Shenzhen Design Award for Young Talents in the City Hall on March 14. A designer of UNESCO Creative Cities of design, are invited to participate in the workshop «Crossroads 2015. Human Cities_The scale of the city in question» on March 16 and 17, which will bring together 12 European partners of the Human Cities program, the designers of the UNESCO Cities of Design, the European Network of Living Labs, local actors and designers. This workshop will conclude with a conference on March 17, which will officially launch the International Project "Human Cities" and "People Olympics", with an introductory lecture on creative cities. 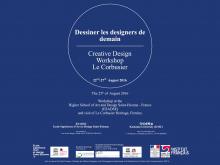 Design Assembly 2019: Designing sustainability in the French ecosystem
About: In December 2019, Saint-Étienne, a Creative City of Design in...
When:
11 Dec 2019
Know more

Finalists Revealed for Designing the M. K. Čiurlionis Concert Centre in Kaunas
About: From June to September, Kaunas, a UNESCO Creative City of...
When:
08 Dec 2017
Know more