From 28 to 30 January 2016, the Paris Images Digital Summit (PIDS) will be held by UNESCO Creative City of Media Arts Enghien-les-Bains Arts Centre with the support of Ile-de-France Film Commission.

The second edition of this event will be dedicated to digital creation in several forms, from the VFX (Visual Effects) to VR (Virtual Reality), animation, CGI (Computer-Generated Imagery) and 3D. The program includes conferences showcasing the best of world digital creation: case studies, roundtables about extracts from blockbusters such as Ridley Scott's "The Martian", Sam Mendes' "007 Spectre", with an area for industry decision makers for digital creation and content producers. It is also foreseen, a awards evening, "The Genie Awards Digital Creation", with the presence of Dennis Muren. 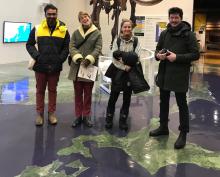