Last month, from 10 to 29 January, the Tsuruoka Creative City of Gastronomy Promotion Council, in cooperation with an executive committee consisting of citizens, held “The First Delicious Food Film Festival” in Tsuruoka, during which food-related films were screened for one week.

The event aimed at developing food awareness and promoting local industries by providing the citizens with opportunities to learn about gastronomy. Among other films, the audience had the occasion to watch:

In addition, a documentary film featuring the school meal supply center of Tsuruoka, which is the birthplace of the typical Japanese school lunch, was screened and followed by a talk with six suppliers of ingredients for school lunches. Looking to developing sustainable ways of production and consumption in the city, their message to the audience was: “We hope to include ritual meals in school lunches to pass along Tsuruoka’s gastronomy.”

As a collaborative event, 32 restaurants in the city reproduced and served the dishes that appear in Japanese and foreign films at their restaurants as limited time menus. 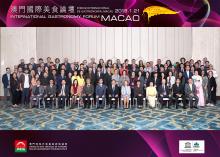 Bergen to Host the World Cheese Awards with the Participation of Creative Cities of Gastronomy
About: On 2 and 3 November, Bergen UNESCO Creative City of Gastronomy...
When:
02 Nov 2018 to 03 Nov 2018
Know more