In Austin, the creative sector is a vital component of the local economy. As state capital of Texas, with around 900,000 inhabitants, it is a place where small, local businesses thrive and has achieved prominence as a trendsetting global city at the intersection of art, music, and digital technology. Growing by 40% over the last decade, the region’s creative sector contributes more than US$ 4.35 billion in economic activity annually and represents nearly 49,000 permanent jobs.

With excellent higher education institutions – including the University of Texas – Austin has a reputation as a progressive city and attracts many creative professionals each year, many of whom have made the state famous with their songs, films, artwork, video games, and innovations. With this, events like SXSW Music, Film and Interactive, Austin City Limits Music Festival and Fantastic Fest have now become perpetual fixtures in the city’s cultural calendar.

From individual artists and creators to non-profit arts and culture organizations, the presence of many talents within Austin has spurred the growth of a rich and diverse cultural ecosystem. As Austin's creative sector continues to expand, its vitality is sustained by the many for-profit creative industries and including music, film, digital entertainment, galleries and festivals found here, as well as by the venues, funders, leadership, and audiences.

Due it to importance, the creative economy has been recognized as a priority in the city’s 2012 Imagine Austin Comprehensive Plan, in which creative industries and smart grid technology – in particular gaming, digital media, and film – are considered as essential levers to Austin local economy.

As a Creative City of Media Arts, Austin envisages: 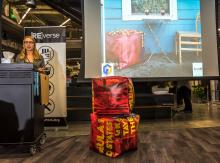 LAB.2030 | How Recycling Waste Has Benefited the Local Communities
About: In recent years, recycling has become a prominent part of...
When:
Tuesday, June 12, 2018
Know more

Austin puts the spotlight on UCCN for its UNESCO Media Arts Showcase at the SXSW Festival
About: The SXSW Festival in Austin, United States of America, is a...
When:
Monday, March 12, 2018 to Tuesday, March 13, 2018
Know more