Afyonkarahisar is a historical city located at the center of western Anatolia, on the intersection of main highways linking many of the major cities including Istanbul in the north of Turkey, to Izmir in the west. As well as being known for its marble industry and rich thermal resources, this prominent city is recognized for its culinary expertise, in particular its Turkish delight and clotted cream. Within Afyonkarahisar, the food-manufacturing sector, consisting of over 800 firms, not only provides vast employment opportunities within the region, but also contributes to 26% of city's export, making it the second largest economic sector. With animal husbandry also being at the core of its economy, charcuterie is a key feature within the city’s gastronomy culture. This endorsement of rural agriculture promotes the use of healthy and organic raw materials within local cuisine and drives a sustainable and inclusive socio-economic development at rural-urban levels.

Gastronomy is a significant part of every life in Afyonkarahisar, and special dishes are often center points in key events including weddings and religious ceremonies. Afyon’s passion for gastronomy is also reflected in the variety of festivals held within the region, including the newly established Gastro Afyon Festival and the Local Flavours Festival. These world-renowned events have attracted many tourists and international chefs to the Province by showcasing regional delicacies, such as opium oil infused pastries, and hosting tradition cooking workshops.

As well as providing financial assistance to start-up businesses and culinary training to migrant workers with the aim of enriching local cuisine and creating employment opportunities, government funded renovation work rebuilding restaurants and markets is underway to ensure that long-term success of Afyon’s gastronomic sector. Other private initiatives, including the 38’30’ Farm and Art Valley, aim to promote traditional cuisine worldwide.

As a Creative City of Gastronomy, Afyonkarahisar envisages: 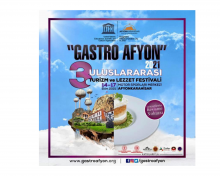 Afyonkarahisar launches the Food Waste Reduction Project
About: As a UNESCO Creative City of Gastronomy since 2019,...
When:
Monday, January 4, 2021 to Wednesday, March 31, 2021
Know more