Located in a sparsely populated region in the centre of Sweden, Östersund, UNESCO City of Gastronomy, is widely appreciated for its gastronomic culture, based on local sustainable food inspired from longstanding culinary traditions.

Bringing together and supporting small entrepreneurs and farmers, Eldrimner, the Swedish National Centre for Small Scale Artisan Food Processing, provides guidance and supports training and product development demonstrating the importance of gastronomy in relation to the creative industries. The city’s culinary tradition is intimately linked to its natural surroundings and the region’s sustainable development efforts.

The management of the food sector in Östersund is shared between the city of Östersund and the Region of Jämtland Härjedalen. The city is the main market for food products, and the rural areas provide a workspace for the producers, thereby strengthening urban-rural connections. Other organizations connected to the food, culture and tourism sector are also involved in these efforts. The sustainability of Östersund’s society is one the city’s priorities. Winner of Sweden’s best climate city award in 2010, Östersund is also using a heating system powered by biofuel and biogas.

The region’s creative sector, incorporating architecture, design, interactive software, film and television, music, publishing and the performing arts, is currently growing by 5 – 10 percent on an annual basis. Tourism is a major part of the local economy. Altogether there are about 2,000 companies and 4,500 employees in the region’s creative industries, most of which are based in Östersund.

As a Creative City of Gastronomy, Östersund envisages: 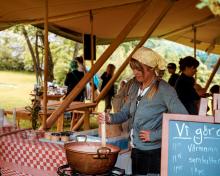