History of peoples: recasting the past

As UNESCO began weaving the thousand and one Ariadne’s threads of past and present, just after the Second World War, it embarked on an adventure of universal dimensions – writing a new History of Humanity. But also of Africa, Latin America, Central Asia, the Caribbean and Islamic Culture.

After the noise and furore of the Second World War and the nuclear hell of Hiroshima, mankind was confronted with a Shakespearian dilemma – to unite or to annihilate? Convinced that “…ignorance of each other’s ways and lives has been a common cause, throughout the history of mankind, of that suspicion and mistrust between the peoples of the world through which their differences have all too often broken into war,” as laid down in the preamble to UNESCO’s constitution, the founding fathers of the Organization embarked on a project for a new History of Humanity. This was to be a work of collective memory that would demonstrate the interdependence between peoples and cultures, while building bridges between history, culture and science.

One of the missions of this audacious project was to forge an awareness of the unity of mankind in all its diversity, thus responding to the intuition of the Dutch historian, Jean Huizinga, who, writing in the 1930’s, said: “Our civilization is the first whose past is that of the world; our history is the first to be universal.”

This ambition of becoming familiar with time in order to overcome a tendency to leave things out, was, indeed, excessive, since it meant no more and no less than setting out, in several collections of regional and cultural histories, the essential creations of the human mind, regardless of their latitude and period.

Is it overly idealistic to wish to fix on paper something that is endlessly being reborn? More of a challenge. Although all societies have a history, the conception of time varies from one culture to another, and, with it, the status accorded to memory. Also, while our geography no longer has virgin continents, the contributions of different peoples to the construction of mankind remains largely underestimated, even unknown – when they are not actively denied or reinterpreted to conform to the viewpoint of a dominating force.

In order to refocus the historian’s eye and to give a voice to those who have not been heard, UNESCO gave historians from all cultures and geographical horizons an opportunity to express themselves, abandoning strictly national approaches and temporary fixes to preserve identities.

“The public now has access to collections of history that rehabilitate the past of civilizations that had hitherto been ignored and that also take a fresh look at cultures that have been obscured by prejudice and stereotypes,” declared Koïchiro Matsuura, Director-General of UNESCO, as he promised to complete this immense endeavour, started in the 1950's.

By weaving the thousand and one Ariadne’s threads of memories of the past and of current events, UNESCO has embarked on an adventure of universal proportions. Here, the notion of time takes on its full meaning, since it enables us to apprehend the global evolution of societies, as cultures blossomed through exchanges, albeit marked by bloody violence, but also through the generous acceptance of difference, leaving indelible traces.

As new forms of ignorance and intolerance emerge today, foisting hypotheses about the end of history and an isolationist quest to preserve identity, the principles of mutual respect, solidarity and dialogue between civilizations and cultures — which inspired the creation of the United Nations system — are as important as ever.

The collections of history published by UNESCO bear witness to the common legacies and dreams of mankind and, given the wide dissemination of their message, may help to build a shared future that will capitalise on the possibilities for mutual understanding between cultures in this age of globalization.

Katérina Stenou, Director of the Division of Cultural Policies and Intercultural Dialogue (UNESCO) 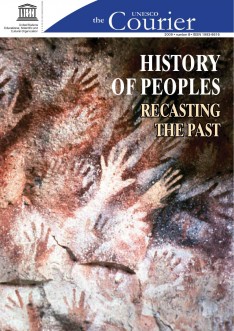