Egypt of the Pharaohs

Long ago, the scholars and travellers of Antiquity were fascinated by the Egypt of the Pharaohs. Today, almost 200 years after modern archaeological study of ancient Egypt began, that fascination is still as potent as ever. Egyptology is a constantly expanding field of study in which specialists patiently try to reconstruct a rich and still in many ways baffling civilization from records remarkably preserved in the dry air and desert sands. The record-breaking crowds which flock to international exhibitions of ancient Egyptian art show that a vast non-specialist public is today eager to know more about ancient Egyptian culture. Meanwhile, the giant pyramids and lavishly decorated tombs and temples of the Nile Valley, the messages of hieroglyphs carved in stone or written on papyrus, have also created a vision (not always historically accurate) of ancient Egypt which has stimulated the imagination of artists, architects, writers and musicians down the centuries.

This issue of The UNESCO Courier retraces some of the steps in the rediscovery of Pharaonic Egypt in modern times and evokes some of the grandiose achievements of ancient Egyptian architecture and engineering. But above all it seeks, in the light of the latest findings by Egyptologists, to show through the more homely and intimate aspects of their lives how the ancient Egyptians saw themselves and their world ; the pattern of daily life and work; the rhythm of the seasons dominated by the annual inundation of the Nile ; the strange, complex and ubiquitous figures of the Egyptian pantheon; attitudes to the afterlife. The picture that emerges is one of a society in which the sacred and the sublime were totally integrated into the tissue of everyday life, a civilization in which the earthly, the ephemeral, and the eternal were uniquely blended. This harmony is perhaps most clearly seen in ancient Egyptian art which, with its minute attention to detail, its gift for conveying the most subtle nuances of expression and movement, provides a vivid panorama of a people, time and place in which all aspects of earthly experience farming, family life, the enjoyment of transient pleasures were sacred activities forming part of cosmic processes. 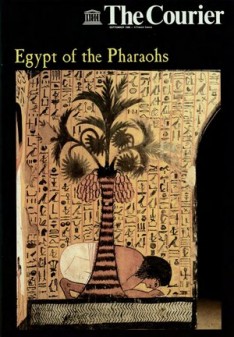