The struggle for human rights has gone on from the beginning of recorded time. History has marked the efforts of the seers and prophets, the philosophers, the lawgivers, the statesmen and the martyrs in voicing demands for larger freedom. But the nerve centre of the struggle for human rights is to be found in the people themselves, in the attempts of ordinary men and women to establish their claim to a decent, unmolested life in the face of despotism and bigotry, of ignorance and intolerance, of superstition and tyranny.

The English Magna Carta of 1215, the Habeas Corpus Act of 1679 and the Bill of Rights of 1689; the American Declaration of Independence of 1776; and the French Declaration of the Rights of Man and of the Citizen in 1789 were all landmarks in this struggle. To these historic declarations of the rights of man was added another on December 10, 1948 when the General Assembly of the United Nations adopted and proclaimed the Universal Declaration of Human Rights "as a common standard of achievement for all peoples and all nations.

December 10, this year, the tenth anniversary of the Universal Declaration, will be marked by special observances throughout the world. Many organizations are holding conferences, special meetings - or discussions devoted to human rights in 1958. Through articles, pamphlets and booklets, and by radio, TV and films, knowledge of the Declaration will be spread throughout the world and the achievements of the United Nations in promoting Human Rights will be brought into perspective.

The United Nations has made much progress in its work of promoting and encouraging respect for human rights and fundamental freedoms, but their "universal and effective recognition and observance" is still far from being a reality. The Declaration sets a standard that can become real only when its principles are applied by individuals, among local groups and in communities within nations and by governments in their relationships with one another and with their citizens. December 10, therefore, should serve to remind us that tremendous efforts must still be made before Human Rights are recognized universally.

The pages of The Unesco Courier this month are therefore intended as a small contribution to the common task of awakening renewed interest in and greater understanding of the basic human rights proclaimed for the first time in history from a truly universal standpoint in the Declaration of December 10, 1948. 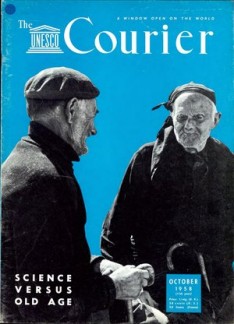