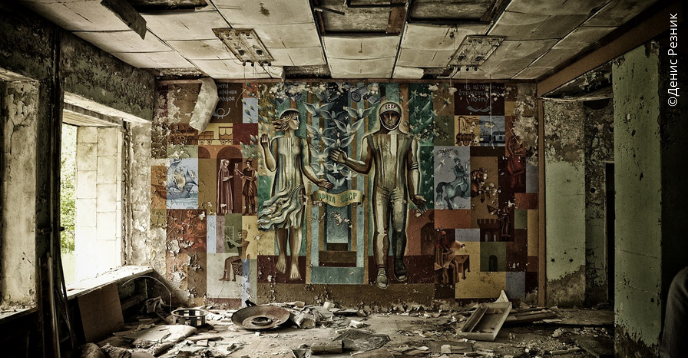 Abandoned building in Pripyat, a ghost city near the Ukraine–Belarus border.

The Chernobyl nuclear disaster continues to threaten the survival of the Belarusian people, says Vasily Nesterenko, a local physicist.*

The UN Scientific Committee on the Effects of Atomic Radiation (UNSCEAR) relies on the figures of the International Atomic Energy Agency (IAEA), which represents the nuclear lobby. In evaluating the disaster, the IAEA has compared Chernobyl to Hiroshima and Nagasaki. But in Japan, the thermo-nuclear reactions took place entirely in the air and the soil was not contaminated. After the Chernobyl fire, neighbouring countries were bombarded by hundreds of tonnes of radionuclides (or particles). The soil of Belarus alone absorbed two-thirds of the fall-out and some of the nuclides, such as caesium-137, stay radioactive for more than 30 years. Food accounts for 80 per cent of the long-term contamination of the population. Since the disaster, my institute has been systematically monitoring children with special spectrometers. My colleague, Prof. Yuri Bandazhevsky, was the first to link the accumulation of radioactivity in people’s bodies to their illness. The contamination has caused many diseases not recognized by international organizations.

What are these ailments?

After doing thousands of autopsies, Bandazhevsky and his team showed that caesium-137 had accumulated in muscle tissue, beginning with the heart. Two-thirds of the 2,000 children monitored in the highly-contaminated area of Gomel have heart problems. The concentration of caesium inthe kidneys has also caused serious mal-functions from an early age. Caesium in the eye muscles leads to cataracts. For example, a 1997 study in Svetlovisy, near Gomel, found that a quarter of children between 13 and 15 had cataracts.

During pregnancy, the placenta in mothers-to-be stores caesium which irra-diates the foetus and after the birth, the mother breastfeeds the baby with conta-minated milk. This leads to several diseases, such as “Chernobyl AIDS,” which is an immunity disorder. The radio-active particles also combine with lead (which was used in 1986 to put out the fire and was then absorbed into the ground) to cause mental retardation and stomach ailments. We are heading towards a national disaster.

What does your country need most?

Two million people, a quarter of them children, are living in contaminated areas. We have to set up mobile units to monitor these people and what they eat. My institute doesn’t have many resources, so can only do very little monitoring. It’salso threatened with closure because the government doesn’t want the “ disturbing ”news to spread. The contaminated children need to be sent for a month’s stay in clean areas at least twice a year and be given pectin-based pills, which are effective, very cheap and made in Ukraine, though not here. We have to set up centres for young mothers in areas where they can eat uncontaminated food while pregnant and breast-feeding.

Why hasn’t your government raised the alarm about all this?

Belarus is facing alone a disaster it’s not responsible for. Neither Russia nor Ukraine, where Chernobyl is located, has helped us. Our national budget only allows a small amount of money to be spent on the victims and our government officials believe they know best. But they haven’t properly evaluated the situation. They’ve lied to tens of thousands of Russians who have come from “hot spots” or crisis areas in the former Soviet Union to live in the contaminated region.¹ They’re still lying to their own people. They have a head-in-the-sand attitude. Only massive international aid and strong logistical support by the government will ensure the survival of my people in the long run.

¹After the collapse of the Soviet Union, 25 million Russians found themselves living outside the new borders of Russia, mainly in Central Asia and the Caucasus where there was and still is war. The Belarusian government encouraged them to settle in the contaminated areas by giving them housing, jobs and resident status.

*Vasily Nesterenko is former director of the Nuclear Energy Institute of the National Academy of Sciences of Belarus and currently head of the independent Institute of Radiation Safety (Belrad).

Chernobyl: before and after, The UNESCO Courier, September 1990 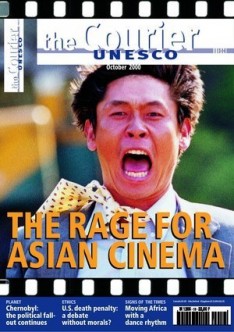