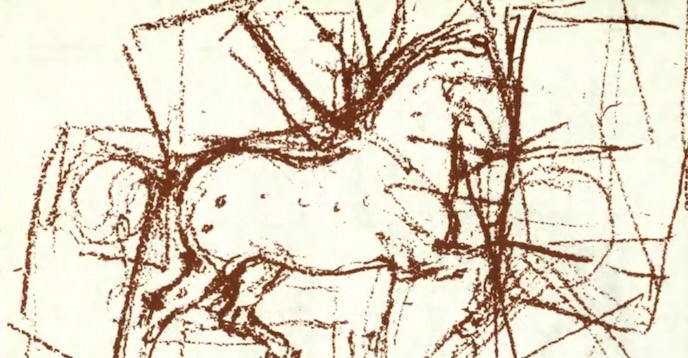 In 1482 Leonardo wrote a remarkable letter to the lruler of Milan, Lodovico Sforza. In it, the brilliant and self-confident young man of thirty offered his services as engineer and architect, and at the end of the letter, in a cunning attempt to arouse Lodovlco's interest, he suggested that "the bronze horse may be taken In hand, which is to be to the immortal glory of the prince your father of happy memory..."

He was referring to the equestrian statue which Lodovico wanted to construct of his father Francesco Sforza.

Leonardo was hired as an engineer by Lodovico and during the next ten years or so he pondered and planned how to construct this great monument, in the intervals between amusing the court with entertainments and painting The Last Supper.

Originally the bronze statue was to be life-size, but as Lodovico's power and ambitions mounted, so did the size of the monument. Finally the horse alone was to be over 23 feet high. To cast it, 100 tons of bronze would be required. No sculpture of this size had ever been attempted before.

Leonardo wanted to cast the colossal statue in a single operation to avoid the disfiguring seams which mar statues cast in several pieces. But existing technology was inadequate for a single casting on such a scale By May 1491 Leonardo had completed a full-scale clay model of the great horse. It was unveiled in the old yard of Lodovico's ducal residence at a betrothal ceremony in November 1493, and became one of the wonders of Milan. But the horse was never cast. In 1494 the bronze set aside for it was sent to Lodovico's brother-in-law to be made into cannon.

For centuries no one could be sure whether Leonardo had solved the intractable problems of casting on such a massive scale. Now the problem is clarified by almost twenty fascinating pages in the second Madrid notebook in which we can actually see Leonardo thinking aloud about the casting. These notes are virtually a treatise on casting problems.

Leonardo draws the horse's pose. He sketches the mould. It "can be made in one day", he notes. "Half a boatload of plaster will serve you. Good." He decides to cast the horse on its side. Then he changes his mind and thinks that It would be better upside down. He draws the bolts which will hold the outside mould together. The ideas tumble onto the page from his fertile brain.

Leonardo abandoned the traditional "lost-wax" method of casting, whereby a wax model was created over a clay core, an outer mould applied, the wax then being heated and drained off, to be replaced by the molten bronze. The worst disadvantage is that the original model is lost.

Leonardo's method was much more complex. He does not describe it fully In the Madrid manuscript, but it can be more or less reconstructed as follows. First an outer female plaster mould was to be made from the original clay model. This outer mould was then to be lined with wax or potter's clay and inside it a male mould of refractory clay was to be made.

This male mould would then be baked, the wax or clay lining removed, and in the empty space between the two moulds a wax countermodel cast. All imperfections were to be eliminated from this wax model and then a new female mould of refractory clay was to be made over it. The wax would then be heated and tapped off, the outside mould removed, strengthened, and then refitted on the male.

The molten bronze would then be poured in.

This was the new system Leonardo devised. Historical circumstances deprived him of an opportunity to put it completely to the test.

The great clay horse came to a sad end too. When the French conquered Milan in 1499, their bowmen used the horse for target practice. It cracked, and then fell to pieces. The mould was also soon lost.

It is interesting to note that some 200 years later when a huge equestrian statue of Louis XIV was constructed in Paris in 1699, the moulding and casting process used was almost identical with Leonardo's.