This issue is devoted to the work of Leonardo da Vinci as revealed in two long lost notebooks which were re-discovered in Madrid in 1965. Now known as The Madrid Codices I and II, they constitute one of the great manuscript finds of the present century. This autumn a 5-volume facsimile edition of The Madrid Codices is being published, by arrangement with the Spanish government, by Taurus Ediciones of Spain, and McGraw Hill Book Company of the United States. The entire work was conceived and edited by a brilliant Vincian scholar, Ladislao Reti, who completed the transcriptions, translations (into modern Italian and English) and commentaries just before his death last October.

Co-editions are being published in Italian, German, Japanese and Dutch. In the Foreword to The Madrid Codices, Luis Sanchez Belda, Director General of Spain's National Archives and Libraries, in Madrid, emphasizes "the broad spirit of international collaboration that has presided over the publication of the manuscripts: financed and directed by an American Company, the reproduction of the illustrations has been made in Switzerland, the composition in England, the editing in Italy and America, the printing in Spain, and the binding in the Fed. Rep. of Germany."

At the same time, a lavishly illustrated 320-page volume entitled The Unknown Leonardo, also edited by Ladislao Reti, is being published by McGraw-Hill and co-publishers in Spain, Italy, France, Fed. Rep. of Germany, Netherlands and Japan. Part of a chapter from this book is published in this issue.

Another unique Leonardo manuscript, the recently restored Codex Atlanticus is now also being published in a 12-volume full-size facsimile edition by the Florentine publishers Giunti-Barbera and the Johnson Reprint Corporation. The Editors of the Unesco Courier wish to express their thanks to McGraw-Hill Book Company, Taurus Ediciones, and Giunti-Barbera for their generous help in making this special issue possible. All photographs, unless otherwise specified, are copyright and reproduced from Codex Madrid I and II.

The strange vicissitudes of Leonardo's manuscripts, by Paolo Galluzzi

Leonardo Da Vinci as told to children, by Bruno Nardini

Leonardo and the strife-ridden renaissance, by Eugenio Garin

The glory of painting, by Carlo Pedretti

To read the full issue and see the many commented illustrations, download the PDF. 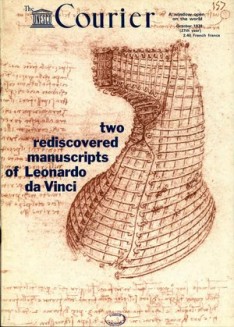