Racism has been called the social cancer of our time. It gnaws away slowly and insidiously until it invades the whole organism of society and erupts in violence and death.

In the years immediately following the Second World War it may have seemed that racism was definitely on the decline. Racial hatred had logically led from discrimination to acts of indescribable horror and death camp massacres carried out on an industrial scale. The shock and repulsion that swept the world so discredited the doctrine of racism that it dared not show itself cynically and blatantly as it had done before.

The struggle against Hitlerism had had its own logic too. One could hardly battle racism and still practice it, even indirectly. And so, in the countries united against Nazism many barriers of discrimination and prejudice tumbled and a spirit of greater tolerance marked relations between the different races.

But the cancer of racism was by no means extirpated.

Human memory is short, and the gruesome past slips or is pushed easily into oblivion.The death camps of yesterday have apparently not been sufficient to put an end to the doctrine that one race is superior to another. The older people in many countries have forgotten them; the new generations barely know they existed. Furthermore, ten years of fanatical racism sowed dragon's teeth around the world and one cannot tell when they may germinate and lead to a terrible harvest.

Today, the excesses of racialism are universally decried and condemned, but the racist outlook or attitude which is at the root of these excesses and makes them possible is still with us. It is all the more dangerous since ours is the century of the great awakening and accession to indépendance of the coloured peoples of the world who have long been its victims. Instead of being accepted as normal and foreseeable, the mistakes and hesitations made by the newly independent peoples as they pass through the trying initial periods of autonomy are interpreted in racist terms by certain people as proof of racial inferiority. In its turn, the racism of the white man has given rise to a reaction among coloured people which, rightly or wrongly, is described as "counter-racism".

Many public and private organizations, both national and international, have sensed the danger of latent racism in the world and have taken steps to combat it. Through science and education the twin means at its disposal Unesco has been at grips with the problem since the first years of its creation. (The Unesco Courier too has devoted several past issues to racism.

Last year and again this year racism became front page news once more. An epidemic of anti-Semitism in many countries and the massacre of negroes in South Africa set off a wave of world protest culminating in the condemnation of such acts by the Human Rights Commission of the United Nations. At Unesco, where feelings ran high, the Executive Board in a special meeting voted a strongly-worded resolution (see partial text on cover) denouncing racial discrimination, anti-Semitism, violence and hatred, and called on governments and Unesco to campaign against these evils and to propagate "the doctrine of the total equality and kinship of all men and women everywhere."

If racism is to be eliminated as an active ideology of our time we must know more of the terrain on which it develops. One thing we do know: the place where preventive measures can be most effective is in the school and in the home. That is why Unesco has set out to inform both the teacher and the general public of the basic facts established by modern science.

Neither anthropology, nor biology nor for that matter any science offers the slightest justification for racist dogmas, which are based on discredited scientific notions or emotional irrationalism. The full facts still need to be placed before every person so that the social cancer of racism may one day be eradicated. 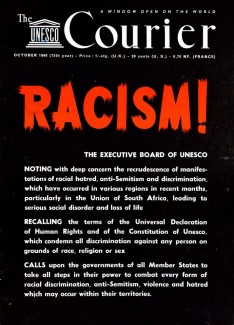