The demand for human rights is so long-standing and so profound, ' the violation of human rights has been so ruthless and so widespread in recent times and is still so prevalent today, that we are not entitled to rest on our laurels. The battle is raging on several fronts, in many parts of the world, and the news reaching us is far from being only news of victory.

I sometimes wonder whether the main thing was not and is not, now more than ever to probe deeper for a better understanding ; and, to that end, to awaken or accustom the mind to the very thought of human rights, which is by no means as instinctive and familiar as people think, or often pretend to think.

It is, in any case, a fact that we have seen precious words impoverished over the years through being uttered mechanically, without reference to their spiritual roots. And now, today, we find that human rights are in danger of losing their prestige and their power of inspiration, even before they have been completely assimilated and made a reality.

In certain countries and some circles, there are people who say that human rights have become meaningless, lifeless, in a revolutionary age where it seems normal to sacrifice the justice and happiness of today to the virtue and prosperity of tomorrow. Others aver that human rights are devoid of substance in a technological civilization, where productivity is the supreme value and where the two crucial problems are increased production and distribution of goods. Others, again the apocalyptic or the indifferent simply proclaim the end of the human race, even its non-existence, and in any case the end of humanism. Let us take heed; man is no longer much in fashion among the leaders of the nations, the technocrats and the know-it-alls of our planet. 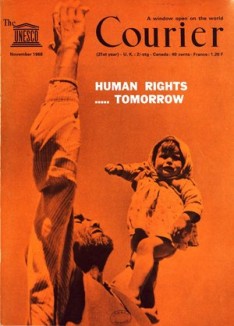