In defence of science fiction, by Arthur C. Clarke

On September 27 in New Delhi, the Kalinga Prize for the Popularization of Science was awarded to the British science and science-fiction writer, Arthur C. Clarke. As tenth winner of this award, Arthur Clarke was also the first interpreter of the space age to be so honoured. The prize-giving ceremony was held to coincide with a meeting of the Indian National Commission for Unesco and thus took place for the first time in the country of Kalinga Prize founder, Mr. B. Patnaik, of the Orissa Legislative Assembly. Below we publish Arthur Clarke's address delivered in New Delhi, in which he describes his award as a tribute to his particular field of writing science-fiction. The idea that artificial satellites might one day be used for relaying radio and television (now become reality with Telstar) was suggested by Arthur C. Clarke as early as October 1945 in an article "Extra-Terrestrial Relays", published in Wireless World

Digging for history, by Rex Keating

The Western world has not always a full understanding of the past achievements in science and technology of other peoples who, however, did not experience the scientific and industrial revolution that has given birth to the modern technological world. Some of the former accomplishments of these peoples along with the problems raised by traditional attitudes in the transition from a rural culture to a machine-conscious urbanized society are discussed in this, the third article in a series which began publication in our July-August issue. They are taken from a new study produced by the United Nations and shortly to be published under the title "Aspects of Underdevelopment: The Background to Freedom from Hunger." 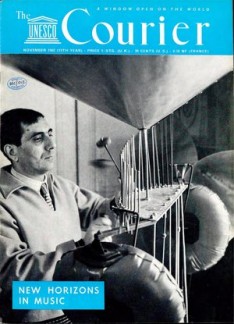