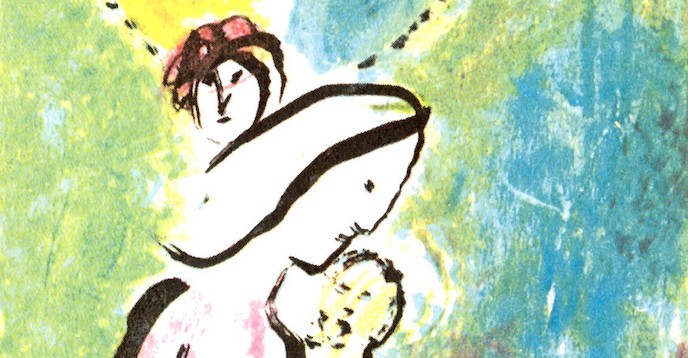 A chain of human solidarity forged by the United Nations Children's Fund (Unicef) today spans 86 countries, helping to protect millions of children from three deadly dangers: sickness, hunger and ignorance. Unicef's chain now girdling the world is composed of gay and artistic greeting cards. From the obscure beginnings of a German wood-cut print bearing a New Year's message about 500 years ago, greeting cards have become an almost universal tradition and within this framework, the Unicef cards have become a tradition in themselves.

Ten years ago Unicef brought a new concept to the custom, by seeking out the works of famed artists as designs for cards which would bring the joys and needs of children to people throughout the world. Since then, Unicef's gallery of contributors has grown to include many great names in world art. Among this year's contributors is Marc Chagall, visionary painter and Biblical illustrator, always close to the world of children and to the folklore of his native Vitebsk. In "Glad Tidings" he has affirmed his faith in the work of the United Nations and has symbolized the strength of maternal care and affection.

Another master of modern art, Mexico's Rufino Tamayo, has contributed an abstract design, "Poetry of Flight", whose soaring movement expresses his concept of the efforts of the United Nations towards peace. Switzerland's Alois Carigiet, has created two appropriate designs entitled "Alpine Games". Both "Bells" and "Sledding" are as crisp and gay as the snow and the happy children they depict.

As an illustrator of children's books, Adolf Zabransky, the Czech artist, has gained international fame in the field of romanticism. The five designs he has made for Unicef are entitled "Tales of Many Lands." His legends and fairy tales portrayed in fascinating colour are: from Holland, "The Legend of St Nicholas"; from Denmark, Hans Christian Andersens's "The Ugly Duckling"; from India, "The Epic of Ramayana" ; from Korea, " The Jade Slipper" and from Brazil, "Snow White and the Seven Dwarfs."

Ettore de Grazia of the United States breathes life, colour and motion into a favourite subject of his Indian children and the Arizona desert. As the children dance in a circular motion, the desert around them seems also to rotate in a whirlpool-like motion. Unicef greeting cards come in boxes of 10, offering to people everywhere an easy way to remember their friends in the festive season while helping sick and hungry children throughout the world.

Through planned universality and variation of art, people in 86 countries are every year given glimpses of other cultures and new approaches to art. In this sense these cards are both educational and conducive to better understanding among peoples.

All Unicef cards are available with Seasons Greetings in the five official languages of the United Nations - English, French, Spanish, Russian and Chinese, or with inside pages blank for use as gifts or personal stationery. They are packaged ten to a box with matching envelopes at $ 1.25 (U.S.A.) ; 7/6 (U.K.) ; and 5 NF (France) per box. 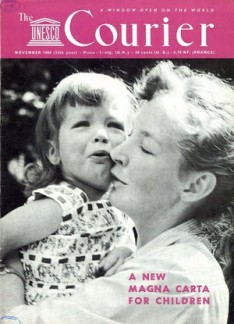