Control of the media has always been a temptation. Repressive regimes without a free press go to extreme lengths to silence journalists. New media are harder to control than traditional media, but so is the quality of the information they put out.

According to the latest (April 2007) Roy Morgan poll of Australians’ perception of professions, journalism ranks near the bottom, with just 12% of those polled feeling that newspaper reporters have ‘high’ or ‘very high’ standards of ethics and honesty. This is just below Members of Parliament (16%) but ahead of car salesmen (4%) and Estate Agents (9%). Yet one of the first actions following a political coup is for the new leaders to take control of the media, such is their perceived power to influence public opinion. And, over the past decade, according to the International News Safety Institute (INSI), over 1,000 journalists and support staff have been killed worldwide. Some of these deaths attract international attention, like the murder last October of Anna Politkovskaya, special correspondent for the independent Moscow newspaper Novaya Gazeta and laureate for this year’s UNESCO/Guillermo Cano World Press Freedom Prize. But dozens of other, less celebrated journalists meet a similar fate each year. Prahlad Goala, of India’s Asomiya Khabar Assamese language daily, was rammed by a truck while riding his motorcycle and then stabbed to death. According to the Committee for the Protection of Journalists (CPJ), he had been reporting on corruption among local forestry officials linked to timber smuggling.

Journalists – like all other citizens - are protected under Article 19 of the 1948 Universal Declaration on Human Rights. But this right isn’t enforced. On the contrary, under repressive regimes, journalists are imprisoned for speaking out.

Promoting press freedom “One of the tasks of UNESCO, through its Division for the Freedom of Expression and Peace”, says Sylvie Coudray, a Senior Programme Specialist at UNESCO, “is to provide assistance to its Member States, who wish to adapt or transform their media and press legislation to internationally-recognised principles, which are respectful of freedom of expression.” UNESCO also uses World Press Freedom Day (3 May) “to highlight free press issues and the importance of an independent media in the democratic process,” she adds.

And a growing number of nongovernmental organisations, including CPJ, Reporters Without Borders (RSF), Article 19, International Freedom of Expression Exchange (IFEX) and the International Federation of Journalists (IFJ), publish continually updated regional alerts on abuses of press freedom and put pressure on governments implicated.

“A key part of promoting freedom of expression and freedom of the press around the globe is to give it maximum visibility,” says Coudray. And there are some surprises, demonstrating that Western democracies do not have monopoly on press freedom. The 2006 RSF Worldwide Press Freedom Index, which ranks 168 countries on a variety of criteria, puts the USA in joint 53rd place, alongside Botswana, Croatia and Tonga, and far below Costa Rica (29th place). The top 15 places are all taken by countries in Northern Europe.

Rapidly-changing media Meanwhile, the media are also changing rapidly, providing new opportunities to get around censorship. Not only do most major newspapers in developed countries have online editions, but some of the leading new players in online news production, like Yahoo! do not even have a print edition. And, most significantly, the rise of blogs has given anyone with an internet connection the opportunity to contribute to news and information, creating a new corpus of ‘citizen journalists’. In March 2007, the blog search engine, Technorati, registered over 70 million blogs, with a new one created every half second.

The ‘blog’ - and associated citizen journalist - brings new problems in its wake. Repressive regimes increasingly use sophisticated technology to jam offending websites and even force internet service providers to identify inconvenient bloggers, who may then be arrested. There is also the question of the reliability and impartiality of the information published on blogs. “The phenomenon will place a heavy responsibility on professional journalists to maintain high standards of fact-checking, honesty and objectivity,” according to Timothy Balding, Chief Executive Officer of the World Association of Newspapers in his opening address to a conference on New Media: The Press Freedom Dimension held at UNESCO Headquarters on 15-16 February, 2007.

The determination of people not just to read news, but to be read, has also had an impact on traditional news media, through their websites, where the public is encouraged to send email commentaries, SMS messages, photos and videos of breaking news from mobile phones. Far from being a threat to the profession of journalism, says Rosenthal Calmon Alves, of the University of Texas at Austin (USA) speaking at the UNESCO conference, “it gives journalism a chance to survive, by becoming more inclusive, more connected with the communities it serves.”

Despite the new technology, old media, especially radio, are still powerful means of overcoming restrictive controls. SW Radio Africa, broadcasting out of studios near London (UK) on short-wave, is aimed at listeners in Zimbabwe. “Hardly anyone has broadband in Zimbabwe,” according to Gerry Jackson, the station’s manager, speaking at the UNESCO conference, “and connections are extremely slow.” SW Radio Africa also uses SMS messages – where the challenge is to compress the news into 160 characters – and the internet. “The moral to the story,” says Jackson, “is try absolutely everything you can to circumvent the censors, and don’t give up.” 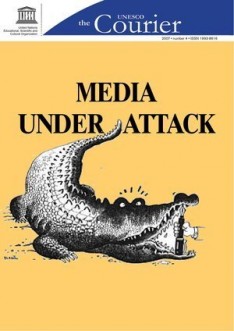