Projecting the planet into the future

Among all the reports about the Indian Ocean tsunami of December 26 and its tragic consequences, two extraordinary stories went to the very heart of education for sustainable development. A little English girl on a beach in Thailand with her family remembered what she had learned at school and understood the natural phenomenon that was unfolding before her eyes. She raised the alarm in time and was able to tell people the best course of action to take.

The Moken people from the Surin islands, who from the dawn of time have made listening to the signals given by nature part of their everyday life, also understood what was happening and escaped the giant wave.

It was partly education and partly traditional knowledge rooted in their culture that gave them the means, limited perhaps but effective all the same, to face up to the tsunami. When education and culture combine with rigorous scientific observation of the oceans, social organization of warning systems and the media’s ability to spread information, it is possible to forge, as is the case in Chile and Japan, individual and collective behaviour that integrates natural risk prevention. UNESCO does not believe a global tsunami warning system can operate in any other way.

While education for sustainable development is the central issue in this edition of the new Courier, current events have prompted us to return to several aspects of December’s catastrophe and put them into perspective.

This regional disaster had repercussions in every region of the world, not only because the killer wave affected so many countries bordering the Indian Ocean, but also because so many tourists were involved and the emotion and solidarity generated from the disaster embraced the whole world. The often invisible threads which join the people of the world together appeared in the blinding white light of this tragedy. The event must also be seen as an echo of the warning made by United Nations experts in their “Millennium Ecosystem Assessment Synthesis Report”, published on March 30.

To give everyone the chance to change their behaviour, a decade is hardly long enough. Representatives of every country in the world gave the United Nations a mandate to set up the Decade of Education for Sustainable Development (2005-2014). They gave UNESCO the task of leading the way. This symbolic act is undoubtedly no more than a means to attract public attention. The scant resources available for the Decade are not in themselves going to change the course of the future. However, growing awareness of the importance of our daily acts and UNESCO’s ongoing actions in education, science, culture and communication give us hope that the UN Millennium Development Goals will be reached by the target date of 2015. 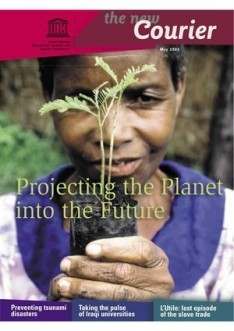