Arab or Asian - that have made the continent what it is. It is the product of those who were there, of those who came from outside - whether by chance, attracted by ambition or hope, or brought against their will, and of those who were born in the New World, the children of history.

Thus, racial and cultural intermingling became the mainspring of integration and enrichment; of converging creative energies and novel insights into the human condition; of the disinterested sense of abnegation displayed in defending a faith; of multifarious relations between cultures marked by confrontations, resistance, assimilation, learning and borrowing. José de Vasconcelos wrote in La Raza cósmica that "the calling of the Ibero-American race" was primarily to become the melting-pot in which "all cultures will merge into one".

America is a melting-pot which can be seen to prefigure the only possible future for the rest of the world - a future in which human beings from different cultural backgrounds will live side by side in peace and join their voices in unison, mixing and intermingling to weave the complex fabric of the human future.

Telecommunications have made it possible to reveal to the world the complex events of our time as and when they happen. Spanish and Portuguese, the common languages of Iberian America, possess qualities that are particularly suited to communication and have made a signal contribution to this miracle. Some people have spoken of the "imperial" power of language, as did Antonio de Nebrija when he claimed before Queen Isabella of Castile that his Grammar of the Spanish language would make it possible to "conquer a world". But Latin America has long since been spared the rule of metropolitan powers which imposed their language on it. It is today a place where language is being reshaped as a medium of expression, and an arena of international communication that is open to the great events of history.

Thanks to the Iberian vehicular languages, the Latin American countries are now claiming and upholding their own ethnic and linguistic heritage, both among themselves and in the eyes of the world. Their voices are blending in the complex harmonies of contemporary culture, especially in literature. "A writer's home land is his language", said Francisco Ayala in El escritor de la lengua española. Only a common language can prove effective in building "a great homeland", while at the same time contending with the challenges of the modern age.

Simón Bolívar wrote that "Education is the foundation stone of freedom". Bolivar dreamt of a united Latin America, but his dream could not come true without the connecting thread of language and intellect or without respect and support for the original cultures. It was a dream that was dashed by more than one hundred and fifty years of discord and is only now being revived through political determination to move towards the unity of the continent. The establishment of free trade areas and regional common markets, together with co-operation in education and science, mark the starting point for a series of developments which found political expression at the First Ibero-American Summit Meeting held in Guadalajara, in Mexico, on 18 and 19 July 1991.

On that occasion, the Heads of State of the countries of the Region and of Spain and Portugal embarked on a process of economic, educational and scientific co-operation, to be followed up in the cultural field by measures designed to ensure the free circulation of goods and services, while situating the problems of Latin America in the world context and taking action to deal with the many world problems, notably those concerning the environment, that lend themselves to national solutions.

In all these areas, courage and determination are needed to correct inequalities. Although we may speak of the moral debt owed to Latin America by the more advanced countries, we must also stress the "internal social debt" of those countries where economic and social differentials condemn vast sectors of the population to extreme poverty. Courage and imagination are needed to create "new models" that will be capable of erasing the bitter memories of the past and the inequalities of the present and of paving the way for a brighter future.

This common task faces not only Latin America but humanity as a whole. Accepting this challenge is the best way of commemorating 1492 - the anniversary of an encounter not only between two worlds but between modern man and his universal destiny, in other words with himself. 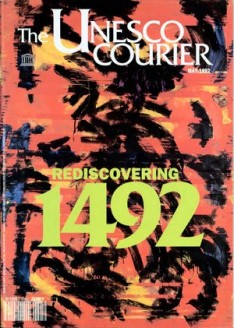