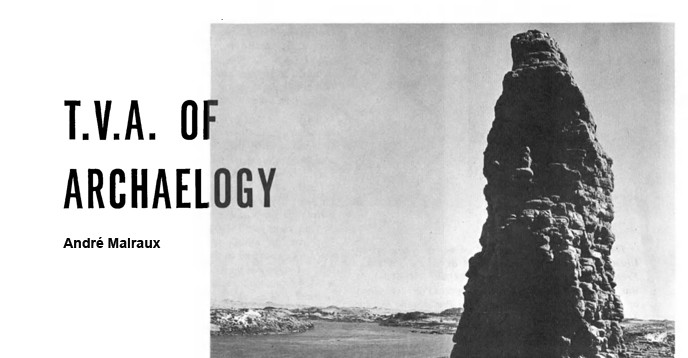 On March 8 1960, André Malraux, French Minister of State for Cultural Affairs, presided the ceremony which marked the launching of the International Campaign for the Preservation of the Monuments of Nubia

On March 8 1960, for the first time, the nations, though many of them even now are engaged in overt or open conflict, have been summoned to save by a united effort the fruits of a civilization on which none has a pre-emptive claim.

Such an appeal, in the last century, would have seemed fanciful. Not that Egypt was unknown then. Her spiritual greatness was surmised, her majestic monuments were admired. But if the West knew Egypt better than it knew India or China, this was because it saw in her a province of the Bible. Through the Bible, Egypt, like Chaldaea, belonged to the dawn of our own history. Of the forty centuries Napoleon evoked as he stood before the Pyramids, the supreme moment was that in which they were beheld by Moses.

Then, gradually, Egypt came into her own, though still within narrower limits than one would imagine. The pre-eminence of Graeco-Roman architecture and sculpture was never called in question; Baudelaire could speak of Egyptian '"naïveté." These tremendous temples, these rapt masterpieces which for three thousand years had seemed to commune with each other in the same unchanging dream, were above all prized as records, the only ones bequeathed to us by the ancient East. They fell within the domain of history rather than of art. In 1890 as in 1820, though the West was moved to study Egypt, it was not moved to safeguard her works.

With our own century, however, has come one of the greatest developments in man's spiritual history. These temples which had been looked on only as records have again become living witnesses; these statues have acquired a soul. Not, to be sure, the spirit which first informed them; but one which is their own, which we find nowhere else but in them, and which nobody before us has found there.

We talk of this art as a witness to a civilization, just as we say that Romanesque art bears witness to the Christianity of its time. Yet in fact we can only really comprehend a culture that still survives. Egyptologists have done noble work: but the faith of a priest of Amon, the basic attitude of an Egyptian to the world around him, are beyond our grasp. The humour of the ostraca, the homely figurines, the text where a soldier calls Rameses II by his nickname as familiarly as his veterans used Napoleon, the worldly wisdom of the legal texts how are we to relate these to the Book of the Dead, to the funereal majesty of the great statues, to a civilization which for three thousand years seemed dedicated only to the celebration of the after-life?

The only ancient Egypt which can come alive for us is the one conveyed by its art and this is an Egypt that never existed at all, any more than the kind of Christianity which would be inferred from Romanesque art if that were our only witness to it. Yet Egypt has survived in her art, not through famous names or lists of victories... Despite Kadesh, one of history's decisive battles, despite the cartouches carved and recarved at the behest of the bold pharaoh seeking to force his lineage upon the gods, Sesostris has less meaning for us than the unfortunate Akhnaton. The face of Queen Nefertiti haunts our painters as Cleopatra has inspired our poets; but whereas Cleopatra is a queen without a face, Nefertiti, for us, is a face without a kingdom.

Egypt, then, survives by virtue of certain forms. And today we know that these forms, like those of all religious cultures, are not to be interpreted in terms of the living people they profess to portray but in terms of the conventions which raise these people to the other world. At their highest expression, Egyptian conventions were designed to mediate between ephemeral men and the controlling stars. It is an art that consecrates night.

That is what we all must feel before the Sphinx at Gizeh, as I remember doing last time I saw it at twilight. I thought then, "'How the second, furthermost pyramid enfolds the view, and how it makes this colossal deathmask seem like the guardian of some trap set to lure the heaving desert and the darkness. This is the hour when the oldest fashioned forms recapture the soft murmur with which the desert echoes the timeless devotions of the East; the hour when they restore to Ufe these places where the gods were heard; when they banish the immensity of chaos and order the stars which seemingly emerge from night simply to gravitate round them."

In such a way, during three thousand years, Egyptian art translated the temporal into the eternal.

Let there be no misapprehension about this today: it is not as a witness to the past that it moves us, nor as what used to be called beauty. "Beauty" has become one of our age's most potent mysteries, the inexplicable quality which brings the Egyptian masterpieces into communion with the statues of our own cathedrals, or the Aztec temples, or the Indian and Chinese grottoes; with the paintings of Cézanne and Van Gogh, with the greatest dead and the greatest living artists; with, in short, the whole treasury of the first world civilization.

This is an immense regeneration, of which our own Renaissance will soon seem a diffident prefiguring. For the first time, men have discovered a universal language of art. We feel its influence acutely, even if we only partly understand its nature. This tremendous storehouse of art, of which we are now becoming conscious, draws its force no doubt from its being the most signal victory of human effort over death. To the impregnable "nevermore" that governs the history of civilizations, this art opposes its own mysterious grandeur.

Of the force that brought Egypt into being out of prehistoric night, nothing now remains; but the impulse which engendered these giants which are threatened today still speaks to us as clearly as the genius of the mastercraftsmen of Chartres, or the genius of Rembrandt. The emotion we share with the creators of these granite statues is not even one of love, nor a common feeling for death nor even, perhaps, a similar way of looking at their work; yet before their work, the accents of anonymous sculptors forgotten during two thousand years seem to us as much untouched by the succession of empires as the accents of mother love.

This is what brings throngs of Europeans to exhibitions of Mexican art; of Japanese to exhibitions of French art; and millions of Americans to see Van Gogh. This is why the commemorative ceremonies of Rembrandt's death were inaugurated by the last kings of Europe, and the exhibition of our own stained glass by the brother of the last Asian emperor. This is why, Mr. Director-General, so many sovereign names are associated with the appeal you are launching today.

One could not too highly praise your having conceived a plan so magnificent and so precise in its boldness one might say, a kind of Tennessee Valley Authority of archaeology. It is the antithesis of the kind of gigantic exhibitionism by which great modern states try to outbid each other. Nor should the well-defined object of your scheme conceal its profound significane. If Unesco is trying to rescue the monuments of Nubia, it is because these are in imminent danger; it goes without saying that it would try to save other great ruins Angkor or Nara, for instance if they were similarly threatened.

On behalf of man's artistic heritage, you are appealing to the world's conscience as others have been doing, this week, for the victims of the Agadir earthquake. "May we never have to choose," you said just now, "between porphyry statues and living men!" Yours is the first attempt to deploy, in a rescue operation, on behalf of statues, the immense resources usually harnessed for the service of men. And this is perhaps because for us the survival of statues has become an expression of life.

At the moment when our civilization divines a mysterious transcendence in art and one of the still obscure sources of its unity, at the moment when we are bringing into a single, family relationship the masterpieces of so many civilizations which knew nothing of or even hated each other, you are proposing an action which brings all men together to defy the forces of dissolution. Your appeal is historic, not because it proposes to save the temples of Nubia, but because through it the first world civilization publicly proclaims the world's art as its indivisible heritage. In days when the West believed its cultural heritage had its source in Athens, it could nonetheless look on with equanimity while the Acropolis crumbled away.

The slow flood of the Nile has reflected the melancholy caravans of the Bible, the armies of Cambyses and Alexander, the knights of Byzantium and Islam, the soldiers of Napoleon. No doubt when the sand-storm blows across it, its ancient memory no longer distinguishes the brilliant notes of Rameses's triumph from the pathetic dust that settles again in the wake of defeated armies. And when the sand is scattered again, the Nile is once more alone with its sculpted mountains, its colossal effigies whose motionless reflection has for so long been part of its echo of eternity.

But see, old river, whose floods allowed astrologers to fix the most ancient date in history, men are coming now, from all parts of the world, who will carry these giants far away from your life-giving, destructive waters. Let the night fall, and you will reflect again the stars under Which Isis accomplished her funeral rites, the star of Rameses. But the humblest worker come to rescue the statues of Isis and Rameses will tell you something you have always known but never heard from men before: that there is only one action over which indifferent stars and unchanging, murmurous rivers have no sway: it is the action of a man who snatches something from death. 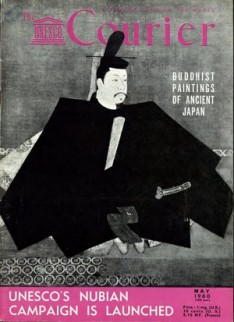