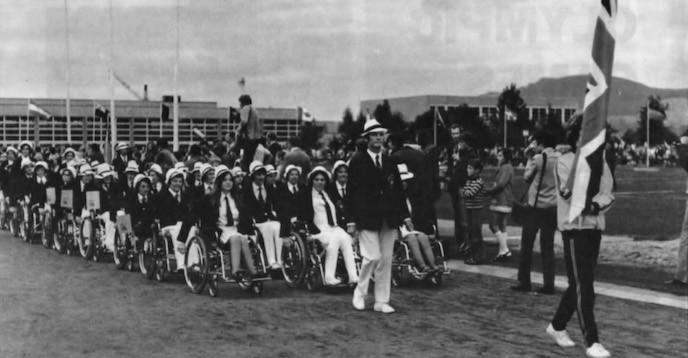 A team from one of the 41 countries at the 1972 Olympics of the Paralyzed during the opening parade ceremonies held at the Heidelberg University sports stadium.
© I.S.M.G. Committee, Frankfurt, Fed. Rep. of Germany

Twenty-five years ago a doctor dreamed a dream. And, In this dream, he saw thousands of severely paralyzed people united in an Olympics of the Paralyzed, the like of which could hardly be believed in a world which at the time wrote off these unhappy victims of Injury and disease as incurable cripples and outcasts.

Today this Is no longer a dream but a reality, and those same paralyzed men, women and children have inspired other disabled ‒ amputees, blind, cerebral palsy cases ‒ to become sportsmen and sportswomen in their own right.

The doctor whose ideas launched this world-wide movement of sports for the disabled is Sir Ludwig Guttmann. During the Second World War, he first introduced sport at the Spinal Injuries Centre, Stoke Mandeville Hospital, in England, as part of the medical treatment of men and women with injuries of the spinal cord who were paralyzed from the waist or chest downwards. His reasons were twofold: first to train the body, and second, to prevent the boredom of hospital life.

Sport is of much greater significance for the severely disabled than for the able-bodied person. Serious physical handicap Interferes to a greater or lesser degree with bodily function and co-ordination and leads to abnormal patterns of movement. These often induce psychological tensions that make social contact with the outside world difficult or even impossible.

If the paralyzed person is continually stared at, he may develop an inferiority complex characterized by anxiety with loss of self-confidence and personal dignity; the result is self-pity, self-centred isolation, and anti-social attitudes. Taking an active part in sporting activities restores his psychological equilibrium and enables him to face up to life In spite of his physical disability.

The final, and possibly the noblest, aim of sport for the disabled person is to help him regain his contact with the world around him. Sport develops mental attitudes that are essential for successful social re-integration and, in particular, for useful employment.

These were the reasons which led to the founding of the Stoke Mandeville Games by Sir Ludwig in July 1948, when a small party of 16 paralyzed ex-servicemen and ex-servicewomen took part in archery competitions. In the ensuing years the Games grew and the number of events were increased to include, as well as archery, bowls, basketball, field events, fencing, track events, snooker, swimming, table tennis and weight lifting.

Today these Games are an International Sports Festival (the Olympics of the Paralyzed) which are held annually for three successive years at Stoke Mandeville Sports Stadium and every fourth year In close connexion with the Olympic Games.

It was this outstanding sportsmanship that prompted the International Olympic Committee, during the Olympic Games in Melbourne in 1956, to award the Fearnley Cup to the organization of the Stoke Mandeville Games. This is an Olympic Award which any sports organization can win for outstanding achievements in the ideals of the Olympic movement.

In 1960 the Games were held in Rome, in 1964 In Tokyo, in 1968 in Israel (as Mexico was not able to accommodate them as well as the Olympics) and In 1972 in Heidelberg. In Heidelberg, as in Munich, these Games were opened by the President of the Federal Republic of Germany, Dr. Gustav Heinemann, who, at the same time, bestowed on Sir Ludwig Guttmann, the founder of the Games, the Golden Star of the Grand Cross of the Order of Merit of the Federal Republic.

Who would have thought when the Stoke Mandeville Games started in 1948 that one day paraplegics and even tetrapleglcs from all parts of the world would fly as sportsmen and sportswomen in their own right, just as do the able-bodied, ten thousand miles and more to represent their countries in international sports festivals?

The whole concept of the Games is embodied In a message written by Sir Ludwig in 1956: "The aim of the Stoke Mandeville Games is to unite paralyzed men and women from all parts of the world In an international sports movement, and your spirit of true sportsmanship today will give hope and inspiration to thousands of paralyzed people."

In 1960, this dynamic man founded the British Sports Association for the Disabled, which is an umbrella organization for all types of disabled amputees, blind, cerebral palsy cases and paraplegics.

Towards the end of 1967 his dream of building a huge sports complex for all disabled began to take form, and in July 1969 the Stoke Mandeville Sports Stadium for the Paralyzed and other Disabled was opened by Queen Elizabeth.

It is due to the loyalty and devotion which Sir Ludwig inspires that this stadium was built by voluntary contributions (with a small government grant) from young schoolchildren and old age pensioners and people from all walks of life and the disabled themselves.

This brain child of Sir Ludwig's is a monument to the devoted work he has done throughout the years for disabled persons all over the world so that, through the medium of sport, they may be reintegrated into the community as equal and respected citizens. 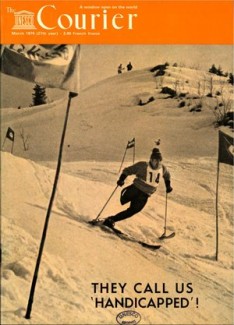