The Roots of racism

In one sens this issue on racism is a follow-up to last month's number devoted to the mechanisms of complex thought. The astonishing advances of genetics are a new reminder of the need to think in complex terms, of how dangerous it is to make do with simple explanations, to float on the surface, confuse the foam on the billows with the depths of the ocean.

A day rarely seems to go by without the announcement that scientists have discovered genes that trigger diseases such as certain cancers and cardio-vascular ailments, and conditions such as obesity. One gène may even predispose people to suicide; another to a spirit of innovation.

Such news items report on highly complex scientific research that may one day lead to major breakthroughs in technology and therapy. When they are presented in oversimplified form to hundreds of millions of non-specialized readers or televiewers, they may have a grossly misleading effect. Instead of regarding the gene as one key among others to the mystery of life, many people come to believe that genetics can explain everything. The impression spreads that we are programmedeven before birth to possess certain qualities and certain defects, perhaps even a predisposition to good or evil.

As well as attaching excessive preponderance to nature over nurture, this approach leads to a perfidious mixture of value judgements and clinical observations. A potential defect comes to be regarded as inevitable. A weak point is magnified into total infirmity. This deviation towards simplistic determinism is bad enough when it leads to the establishment of hierarchies and of inequalities between individuals. It becomes criminal when it seeks to define classes of people which are inherently endowed with a certain weakness or a certain token of superiority. Genetics is not at fault hère, but it may, like Darwinism in the late nineteenth century and biology early in the twentieth, serve as a new pretext on which to base old prejudices.

We are living at a time when racism is again rising from its ashes and manifesting a virulence and pervasiveness that we hoped had disappeared at the end of the Second World War. This is why we have thought it necessary to go to the roots of this evil phenomenon, to the obscure origins of racism, to the enigma that underlies it and perpetuates it in various guises in different times and places.

What causes racism to appear and reappear?

One contributor to this issue, French sociologist Michel Wieviorka, suggests that racism is a corollary of modernity, and that its resurgence is a resuit of the collision between economie globalization and cultural individualism. Etienne Balibar argues that it is a fearsome instrument of collective identification, the evolution of which often goes hand in hand with modes of social domination. American sociologist Stephen Steinberg believes that only interventionist policies can shake the structures in which discrimination is enmeshed. Geneticist Albert Jacquard reminds us that however often science exposes the alleged "scientific" justifications of racism, racism continues to feed on our fears and repressions.

We also publish excerpts from landmark texts by Elias Canetti and Claude Levi-Strauss to round off our analysis of an evil that Gandhi once admitted was for him a "mystery". 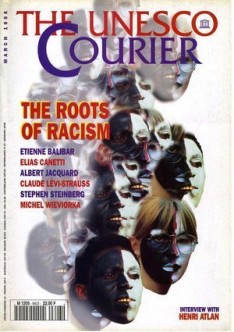