In order to protect and implement human rights, we have a practical task to perform, that of securing wider acceptance of the international instruments adopted in this field by the United Nations, the International Labour Organisation, UNESCO and other institutions, so that the whole of humanity is covered by them.

This practical, effective universality that we are striving to achieve is the reflection and corollary of another kind of universality that underpins it, the universality of the values enshrined in the Universal Declaration of Human Rights, the landmark text whose fortyfifth anniversary we celebrated in 1993. The universality of human rights: the words say so much and yet so little. Are we fully aware of the ethical truth summed up therein, that each and every human being has the same rights? Do we truly understand that each individual is both a unique being and the epitome of the species ? Do we recognize, in our way of life and behaviour, the implications of the fact that human rights belong within the common heritage of humanity?

These rights are common to all because they belong to each and every one of us, universal because they transcend cultural differences. One may argue against their being uniformly applied to all cultures, to the extent that such an objection is part of a larger struggle to resist the creeping uniformity threatening to engulf the world. However, the values in whose name these rights are invoked correspond to aspirations inherent in human nature and are therefore indeed universal.

These rights have a collective dimension, in the sense that they may be claimed by individuals as members of a group, or when their enjoyment presupposes a social framework. In this connection, on the eve of the International Decade of the World's Indigenous People, the voice of those people must be given a hearing, must be heeded, and must bear its part in the democratic polyphony.

At the dawn of the third millennium, the concept of human rights interactive, inseparable and indivisible has broadened to encompass economic, social and cultural rights, civil and political rights, the right to a healthy environment, the right to human and sustainable development, and even the rights of future generations. We should welcome this continuing process of expansion, which is necessary for the full realization of these rights.

Come back to Human Rights: The Unfinished Task, March 1994 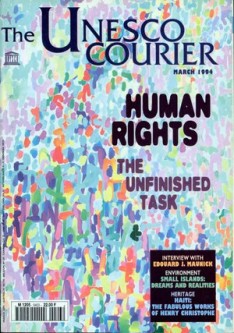