This issue of the Unesco Courier is concerned with a crucial world problem: the extraordinary phenomenon of urbanization today and its far-reaching implications for tomorrow.

By the year 2000 half the people on Earth will be living in cities facing acute problems of housing, transport, food and water supply, schooling, sanitation and security. The lion's share of urban growth is taking place in the developing countries whose drama of rampant urbanization dwarfs the problems of urban stagnation and inner city decay encountered in the industrialized world. With their services already overburdened by their present populations, Third World cities exercise a magnetic attraction on the people of their surrounding rural areas, luring a massive influx of migrants for whom the bitter reality is not streets paved with gold but a desperate struggle for survival in slums and shantytowns. Our article "The World's Urban Explosion", in which these and other aspects of the crisis of the world's cities are evoked, is based on the report of an international symposium held in Paris in October 1984 and attended by more than 800 people from 70 cities.

Almost one third of this issue is devoted to a presentation of the prizewinning projects in a Unesco World Competition for Young Architects on the theme of "Tomorrow's Habitat", organized on the occasion of International Youth Year 1985. The projects are being exhibited at the International Exhibition in Tsukuba, Japan, from 17 March to 16 September this year. The Chairman of the Jury for the Competition was Kenzo Tange and our presentation of the prizewinning projects is prefaced by an article in which this celebrated Japanese architect and city planner looks back over almost half a century on the ideas and theories that have shaped his work.

Two more of this month's contributors are internationally renowned architects: Oscar Niemeyer, the designer of the principal buildings of Brasilia, Brazil's capital, whose conception of a city for the year 2000 attaches due importance to the role of culture, recreation and leisure in urban life; and Hassan Fathy of Egypt who outlines a plan for Cairo tomorrow.

Finally, Jean Dethier, a Belgian architect specializing in the use of unbaked earth, examines a possible solution to housing problems opened up by the modernization of traditional methods of building with this readily available material.

Discover also other issues dedicated to cities in the Courier 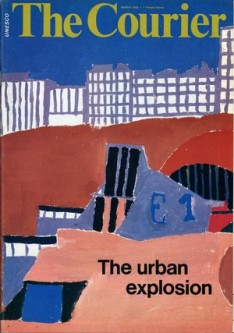