The Awakening of African cinema

The cinema made its debut in Africa in the very first years after its invention. A vaudeville magician managed to steal one of the first "theatregraph" projectors from the Alhambra Palace theatre in London in 1896 and used it to introduce motion pictures into South Africa. It is interesting to note that South Africa still employs the turn-of-the-century word "Bioscope" to describe a cinema theatre.

In West Africa the first motion picture projections go back to 1905 when mobile cinemas began showing animated cartoons in Dakar and in surrounding villages. It was also during this period that explorers first began to use motion picture cameras in the course of their travels. The French Film Library (Cinémathèque Française) in Paris possesses several »catalogues by Georges Meliès which make mention of the first films made in Africa.

Since this early pioneering period the cinema has witnessed quite an extensive development in Africa. Tropical Africa, however, has remained one of the most under-developed regions as far as film showings are concerned, and the world's most retarded continent in the field of film production.

While Asia and South America have »been making films for years (in fact Japan, India and Hong Kong are now the world's three leading feature film producers, ahead of the U.S.A. which has dropped to fourth place), tropical Africa has as yet to turn out its first full-length feature picture. As the French film historian Georges Sadoul recently wrote: "Sixty-five years after the invention of the cinema, not one truly African feature-length film has been produced to my knowledge. By that I mean a film acted, photographed, written, conceived and edited by Africans and filmed in an African language." 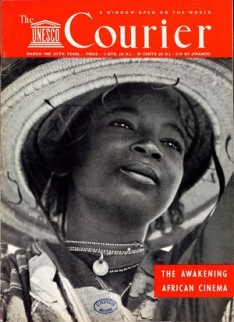