Ever since its foundation UNESCO has been concerned with the problems of widespread illiteracy among the world's peoples and with the measures taken for its elimination. A large portion of UNESCO's efforts in the first ten years of its existence has been directed towards the promotion of fundamental education, particularly in educationally less well-developed areas of the world.

There is now abundant evidence to show that illiteracy goes would have us believe that the illiterate inhabitants of distant "exotic" lands should be left to keep their traditional ways, free from the stress and hustle of technically advanced societies. Why waste time and money on illiterate slum-dwellers or peasants who appear to like it that way? Whatever case can be made out in support of the thesis that isolated illiterate communities are or once were stable, relatively happy and prosperous, there is now hardly any region of the world where backward or pre-technical societies are not feeling to some extent the disruptive impact of modern technology.

There is now abundant evidence to show that illiteracy goes hand-in-hand with under-nourishment, endemic disease, poverty, endless and unrewarding drudgery, demoralization. This is not to say that illiteracy has "caused" these ills or that they will be automatically removed by the. simple expedient of teaching everyone to read and write. But it can no longer be denied that social and economic improvement in these regions can be achieved only through the assimilation of modern techniques of production, distribution, medical and social welfare, etc. and that the assimilation of these techniques requires education and that a basic part of this education will be learning to read and write.

The relationship between the growth of literacy and changing techniques is observable in the history of the technically advanced countries. In Europe and North America the spread of literacy accompanied the increase of industrialization begun by the Industrial Revolution. Mass literacy arrived only in the second half of the 19th century, or even later. The introduction of free and compulsory education was, and remains, the direct agent in the process of reducing illiteracy. In some countries the extension of popular education preceded the rapid industrial advance, in others it followed ; but the two phenomena have always been closely associated.

It would be a mistake, however, to regard literacy as merely a function of industrialization. Literacy and industrialization are both means, not ends. They are, or should be, means for achieving a better life. Besides the improvement of his material lot, a man must be literate if he is to take an intelligent and active part in the organization and life of his community and assume his full stature as a human being. As long as more than two fifths of the world's adult population cannot read and write in any language, and are thus deprived of their full participation in the cultural life of mankind, the question of world illiteracy must continue to be of concern to all. 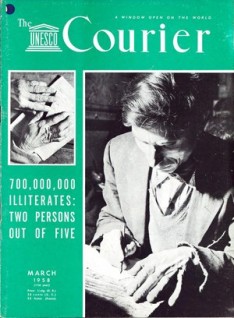