All human societies, past and present, have coexisted with populations of animals of one or many species. This issue of The UNESCO Courier explores some of the many dimensions of the relationships which have arisen from this coexistence at different times and in different cultures. The articles on the following pages may raise more questions than they answer, since human attitudes to the animal world have been so diverse, and so often replete with mystery, paradox and ambiguity. The very question "What is an animal?" produces answers which differ from one culture to another, and definitions of animality, whether "folk" or "scientific", reveal much about the ways in which the definers see themselves. The lovable animal of one culture may be the unwanted pest of another. Modern industrial society may seem no stranger to ambivalence in this field when it lavishes affection on pets yet tolerates the cruelty of intensive forms of conveyorbelt husbandry. And even when modern man is most seemingly benign to his fellow creatures, his activities have such a far-reaching impact on the environment that the survival of many animal species is being jeopardized by the destruction of their habitat. The earliest surviving record of the man-animal relationship can be found in prehistoric rock art.

Creation myths of some early societies speak of a golden age when "gods, animals and people lived together and communicated as equals in a common language", perhaps reflecting a balanced and in a sense almost egalitarian relationship between hunters and animals. Such societies killed what they needed to survive, and usually did not exceed the capacity of the environment to replenish the resources they had taken. Then came a revolutionary change: with the transition from hunting to pastoralism and the development of animal husbandry, certain animals were domesticated and came under human control. This was the beginning of a process which still goes on today.

The man-animal relation can be seen from many standpoints. Our species has used animals symbolically to embody a range of qualities, from innocence to dark unruly forces; we have involved animals in religious practices; our feelings about animals have been vividly expressed in the visual arts, literature and folk tales, and in anthropomorphic cartoon animals. Man has studied animals scientifically and used representations of their society in attempts to understand his own; he has explored the boundaries of communication with animals. And while engaging in these multiple activities he has felt a diversity of emotions: fear and admiration, cruelty and affection, familiarity and distance, reflecting a complex relationship varying from friendship to hostility and uneasy truce. 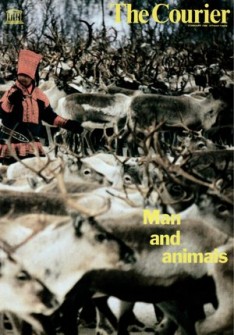