My first steps in space

March 18, 1965 is a date that will be remembered in the history of astronautics. On that day, soviet cosmonaut Aleksei Leonov became the first man to leave a space vehicle and walk about in outer space. The thrill he experienced as he emerged from the capsule, hurtling around the earth at more than 28,000 kilometres an hour, and what he saw during his extraordinary adventure is recounted to us in this issue. The article My first steps in space was specially written for the readers of the UNESCO Courier by Aleksei Leonov himself. Photographs are reproduced from the colour film taken by Leonov and his colleague aboard Voskhod II, P. Belyayev. This film was given its world première at UNESCO House, Paris, on May 6, 1965. 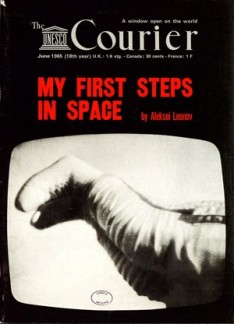