Enigmas of the Universe

Four hundred years ago Galileo took the dark stains on the surface of the Moon to be seas. He was wrong. Today, we send missions to the Moon in search of water. Technological advances have been extraordinary: in the past 20 years 350 planets have been discovered outside of our solar system and several months ago the first images of them reached us via satellite. Telescopes on earth and in space explore the universe 24 hours a day, yet it is still remains largely unknown.

To help us penetrate his secrets the United Nations declared 2009 the International Year of Astronomy (IYA2009). Submitted by Italy, the homeland of Galileo, the initiative is lead by the International Astronomical Union and UNESCO. With the motto “The Universe – yours to discover” the IYA2009 aims to stimulate interest in astronomy among the general public and especially youth. Activities are underway around the world and UNESCO has organised a series of events designed to both stimulate research and disseminate scientific knowledge. Exhibitions for young and adults have been organised, as have scientific symposiums and debates with the wider public featuring many of the world’s leading astronomical experts.

In terms of scientific research, the main topic discussed was that of dark matter and dark energy. “Ninety-five percent of the total energy of the universe is not visible in the sense we usually understand it, so we nicknamed it “dark matter” and “dark energy”, said Nobel laureate Physics George F. Smoot. Françoise Combes of the Paris Observatory added “Scientists invented the notion of dark energy to explain a phenomenon discovered 10 years ago – the acceleration of the expansion of the universe. According to the theory most widely accepted up until then the universe has been expanding since the Big Bang and will contract in a “Big Crunch”. Today we know this theory is false, yet it is still unclear what causes the acceleration.”

In terms of popularising science, the main concern for experts is educating youth and teaching astronomy in schools. “In my opinion, we should start teaching astronomy in primary school” declared Beatriz Barbuy, a Brazilian astronomer and recipient of the 2009 L’Oreal-UNESCO award for Women in Science. Interviewed during the preparation of this issue by the Brazilian journalist Dênio Maués Vianna, Barbuy explains: “The mysterious world of stars and galaxies greatly intrigues children. Astronomy is an excellent way to teach children not only about cosmic phenomena, but also mathematics, physics, optics, chemistry and even computer science and biology.” She believes that the reason why astronomy appears inaccessible is because it’s not sufficiently featured in school curriculums. The resulting lack of knowledge has a negative impact: “scientists are often frustrated to note that obscurantism sometimes prevails over the facts established by science” ».

Read this issue. Downloaf the PDF

Online article: Over the Moon, by Hatim Salih.

Astronomy: the three tiers of research by Michel Mayor 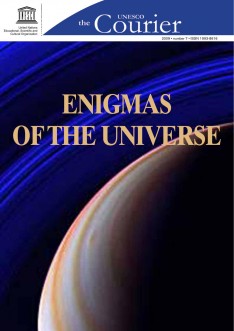