For almost a year now, vast forested tracts of the globe have been burning own one by one. It all began in August 1997  in Malaysia and Indonesia. Then in April this year it happened in the Amazon, the Philippine island of Pa l away and eleven States in Mexico.

On 19 September 1997 a state of emergency was declared in Sarawak, the Malaysian State in the northern part of the island of Borneo. About two million people were warned to stay indoors because of the thick smoke (twelve times more carcinogenic than tobacco smoke) from forest fires in Kalimantan, the island of Sulawesi and Irian Jaya, in Indonesia. Fumes from the hundreds of thousands of hectares ablaze affected some 70 million people in Southeast Asia to vary in degrees.

Indonesian environment minister Sarwono Kusumaatmadja said the health of 20 million of his combat riots was threatened. The least hardy of them died. Many accidents occurred. Air and sea traffic was disrupted. An Airbus plane crashed in Sumatra on 26 September1997, killing 234 people.

The  guilty  party  was  said  to  be  El  Niño (which in Spanish  means   the   Christ Child), a  climatic  phenomenon  which appears at Christmas-time every three or four years, and sometimes every seven to ten. When  the  trade  winds, which usually blow across the Pacific from east to west, lose strength, an enormous mass of warm air  about  the  size  of  the  United  States, normally  held  in  position  by  winds  near Indonesia ,heads for the coast of Peru and then  moves  away  in  the  opposite  direction, towards the east. This  movement  is  part  of  a  climatic fluctuation known as the El Niño Southern Oscillation (ENSO) which is thought to be responsible  for  the  weather  disturbances around the world last year and this.

In 1997, the monsoon rains came late. In Indonesia, the fires began in August during one of the most severe droughts of the past fifty years. In fact, they had been smoldering since 1982-83, when a heavily logged area of 3.5 million hectares—as big as Belgium—had burned. The conflagration was helped along by the abundance of peat in Kalimantan, as well as by seams of coal and lignite, which sometimes run close to the surface. Even heavy rains failed to put out the smoldering fires which burned on for lack of bulldozers to cut wide trenches to act as fire breaks.

But if unusual weather fanned the flames, the main culprits were human beings. A distinction must be made bet-ween small peasant and big farmer. Both use fire as a tool, but to different degrees. A fire on one hectare of land can be put out. Bigger conflagrations cannot be controlled and lack of water and firefighting equipment, along with difficult access, mean that forests are lost.

Fire has always enabled the native peoples of Borneo and Sumatra to live off the land. Their often-criticized slash-and-burn method of cultivation is not as harmful to the environment as is some-times thought, as long as the land is left fallow for some time. The soil is not naturally fertile, so the absorption of ash from fire over two or three years enriches it. The secondary forest grows back and fifteen or twenty years later the peasants burn it down again.

Miriem Bouamrane, a young economist who has lived in Java and Sumatraand works for the International Centre for Research on Agroforestry (ICRAF) based at Bogor, near Jakarta, cites the Dayaks, one of the region’s main ethnic groups, as an example. “They aren’t being irresponsible,” she says. “These are age-old practices. They live in very close contact with nature and only burn a small area and watch that it doesn’t spread. They also worship trees in their religion and are always planting them. They use the products of the trees but also save from extinction species like the damar, which produces the resin which is their main source of income. ”The most convincing evidence of this is that just about the only places where the tropical forest survives are the areas where the Dayaks live.

But the “settlers” which the government encourages to leave overpopulated Java with an offer of between one and five hectares of land on neighboring islands behave differently. They do not have the same knowledge and try to make quick profits growing rice, pepper or coffee.

The Brazilian State of Roraima, along the border with Venezuela and Guyana, went up in flames in January 1998. But according to an official of the Amazon Research Institute (INPA ) ,  the fire really began there twenty-eight years ago, when the then – military government began the settlement of Brazil’s Amazon interior by luring small farmers from the overcrowded  south-central and north-eastern part of the country. “In 1978,” says Reinaldo Barbosa, “the State had 80,000 inhabitants, 32,000 of them Indians, and was 72per cent forested. By 1996, the population had grown to 262,000. The settlers conquered Amazonia by burning down the forest.” Like the settlers in Indonesia, the newcomers in Roraima had used firer at her than bulldozers, and between 1978 and 1996 cleared land increased fifty – fold.

The forest—a refuge and a nursery —was their foe. “The plans of the Settlement and Agrarian Reform Institute (INCRA) only spread poverty by encouraging the settlers to destroy the forest, ”says Barbosa.“ The proof is that a hectare of cleared land in Roraima is worth ten times more than a hectare of forest.” The Environmental Institute (IBAMA) suggests that the settlers, who are officially not allowed to clear more than half of their 100-hectare plots, start fires illegally to do the job. Land ownership is crucial in a country where two per cent of the land owners possess more than half the surface are being farmed and are greedy for more. Walter Blos, head of the National Indian Foundation (FUNAI), warns that many white farmers are keen to get their hands on the 10 million hectares of Indian reservations that fires have already significantly encroached upon.

In Indonesia, timber companies and commercial tree plantations have been quite legally carving up the tropical forests for more than fifteen years in pursuit of maximum returns. And fires stoke up the profits. Not only do the logging companies not have to clear the forest floor of unsaleable timber, but they enable the fire-cleared ground to be planted with crops like palm oil or eucalyptus which bring in quick profits. According to Indonesia’s forest minister, between 500,000 and 700,000 hectares of forest have been turned into plantations in the past fifteen years. On the burned forest areas, which range in size from 300,000 to 900,000 hectares,560 deliberately-started fires were recorded. Sometimes this was to the detriment of the perpetrators: according to the UN Food and Agriculture Organization ( FAO ) , the fires in mid-October also consumed 76,000 hectares of productive forest and 90,000 hectares of coconut, palm oil and rubber plantations.

President Suharto reminded the country that starting fires had been banned since 1995, but this did not deter the big companies. In October 1997,160 Indonesian firms were found responsible for starting fires. Out of forty-six investigations, five led to legal action .I n Malaysia, the seventeen firms found guilty were fined a total of $8,000 and that was that. In Brazil, President Cardoso signed an environmental protection mea-sure into law on 12 February. It does not punish slash-and-burn, so as not to penalize Amerindians like the Dayaks, who use the method with care. But it decrees prison terms and the closure of firms found guilty of ecological crimes. It is tougher than the law it replaced, which only enabled the government to collect six percent of the fines imposed. But will it be more of a deterrent?

The experts at ICRAF are very pessimistic. “The forest fires in Indonesia will not stop until all the country’s forests have disappeared,” they say. The cause of the fires in the Amazon and Mexico are the same. Are the forests there also doo-med to destruction? 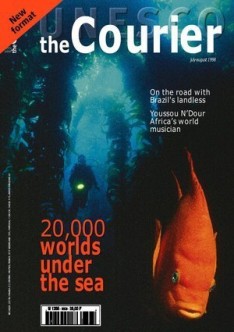